Two Gentlemen with a Mysterious Past

These two handsome gentlemen are Ginger (the red crested on the right) and Biscuit (the tortoiseshell and white sheltie on the left). They came into our household in autumn 2016. Their story is one of mystery.

Sold in their youth from Pets at Home, they were returned at the age of 18 months for unknown reasons. Both handsome, elegantly dressed and with perfect manners, but one of them bearing a mysterious scar, their fortunes had taken a turn they could not have foreseen, and their future prospects seemed grim.

Little did they know that we would find them there and offer them a place in our home, which they have repaid with perfect courtesy and overwhelming cuteness. Their only regret is that their new home has no prospect of romance; but even that they seem to take care of between themselves. Their deep attachment is an inspiration, and sometimes an embarrassment in front of guests.

What is their history? Who were their owners, and what became of them? Whence came the mysterious scar? Are they brothers, or passionate gay sweethearts? These questions, and many more, will forever remain unanswered.

I used to frequent these boards about ten years ago, but our previous army of four pigs eventually passed away and we have been in a pig desert since then. Ginger and Biscuit have brought us back to the adorable world of pigness, and we are sorry we ever left.

As the story says, we adopted them from the returns section at Pets at Home. We have no idea why they were returned, obviously after someone had owned them for quite some time. They are well-adjusted pigs with no sign of trauma or neglect, except perhaps a bit unused to being handled, but certainly not wild. Biscuit has an old eye injury (the scar mentioned above) and a permanent head tilt, possibly the result of an old infection.

They are both, as I said, gentlemanly and polite pigs who rarely bite (Biscuit never) and do not wheek at all (the vet has checked this and says it's nothing to worry about). They rumble and mount (a LOT, from all directions!), but are distractedly fond of one another and will climb from lap to lap to be together. Biscuit looks the biggest and does the most rumbling and challenging, but Ginger is actually much heavier (Biscuit is all fluff) and will occasionally assert himself by lying across the house door, trapping Biscuit inside. We have no idea who is dominant, it seems to change from day to day.

We love our pigs and they bring us joy every day. I could go on and on telling their stories, but if you're still reading, your probably begging me to stop. Thank you for reading our story, and I wish all pigs and owners a happy day.
Top

Sorry about the broken image link 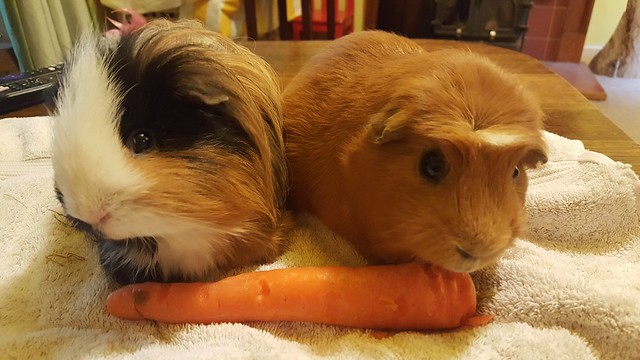 What handsome gentlemen! And so good to have you stop by and share them with us! I love their soft little noses!
Top

Gorgeous pigs! We have 2 sisters who get along great with each other, but are each distractedly fond of one our old lady pig who they just met last fall. And will climb from lap to lap to be with her.

Do perfect manners mean they don't poop & pee in your lap? And do I detect a bit of Jane Austen like style in your prose? Does their cage have a pleasing prospect?

And do I detect a bit of Jane Austen like style in your prose?

I thought that too! My mind wandered to Northanger Abbey my favourite Jane Austen story. Your piggies are very handsome! And I love your story so far and can't wait to hear more!
Top

They are handsome and dignified and what they do in their own time is their own business!
Top

They make it everyone's business, believe me.

Thanks for all the kind responses! Due to popular demand, I will be back shortly with further stories of our dapper heroes.
Top

Hey, Catt, great to see you and your new handsome pigs. It has been a while, hasn't it?
Top