So I went on a vacation to see my granddaughter graduate and left my boys in the capable hands of family members. Everyone knows how precious my boys are to me. I always miss them terribly and suffer a bit of separation anxiety. They were well fed and well cared for while I was gone, except that Ella had a hard time with getting their cage back together when she changed the fleece. Upon my return, I discovered why. The horse bedding works very well for soaking up the urine and helping the fleece stay dry, but it gets under the wire cage and make it hard to work with.

My solution was to cut some 2 by 3 boards to use as barriers along the inside edge to keep the bedding pellets in place. I wrapped them in fleece with barrier plastic underneath to keep them from getting soaked with urine and to prevent Sammy from chewing on them. With the plastic sheeting underneath, I can wash them off without getting the wood wet. So far it's working very well. Unfortunately, it prevents the use of the separator with the ramps, but I have a tunnel, a hammock and a fleece forrest that make up for it.
Top

I'm confused. Why is changing the fleece hard with pellets? I just picked my fleece up and replaced it with a clean one. I never bothered the pellets unless it was time to stir them.
Top

Its hard to explain, but I'll try. The cage has a canvas bottom, not a hard plastic base. The cage is rectangular and fits inside the edges of the base. If the pellets get under the wire cage part, they partially raise it and the rectangular shape gets distorted so that the top doesn't fit right.

The other problem I solved was the piggies being able to get underneath the fleece and chew the pellets. The wood creates a stiff edge that the canvas bottom lacks. It provides a way to tuck the edges of the fleece to keep it in place better and it also keeps the bedding pellets from getting underneath the wire cage and outside of the fleece bedding. I hope that explains it.
Top 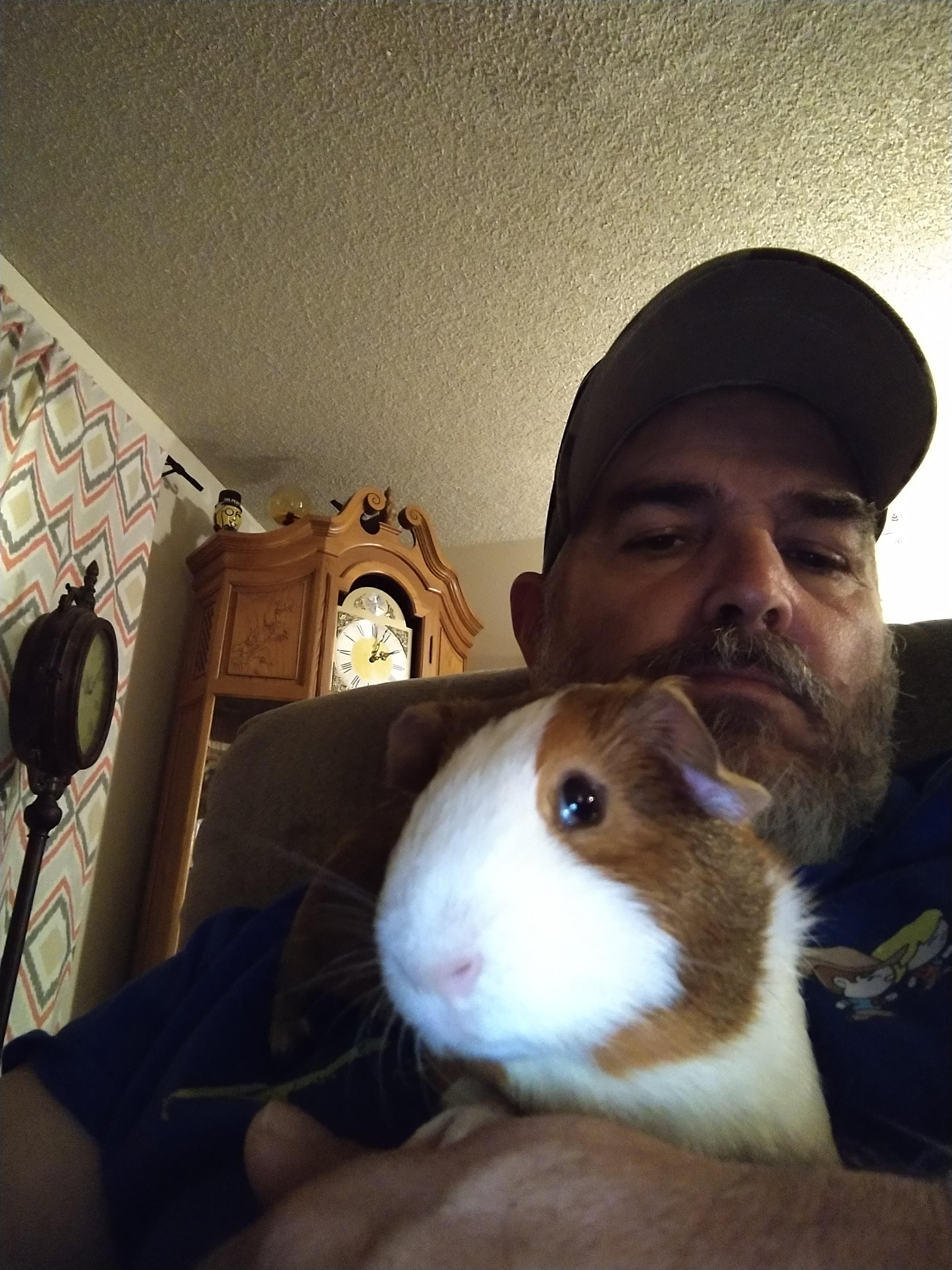 My little buddy missed me! Sammy likes to sit with me.
Top

He is a cutie.
Top 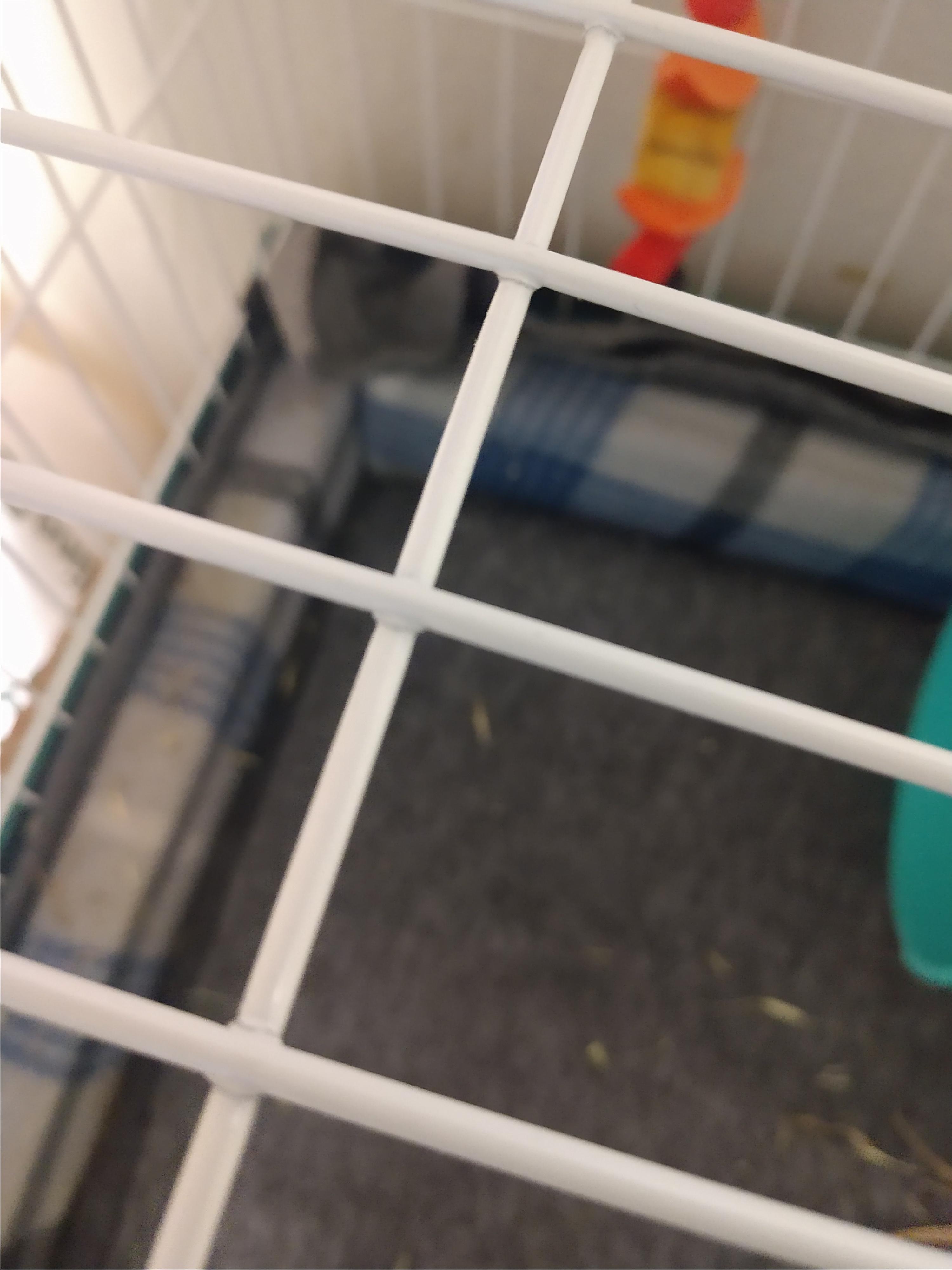 This is how I did the cage bottom. The fleece stays tucked in nicely and keeps the bedding pellets nicely in place.
Top

Good idea! Your guys are so cute. :)
Top

Thank you! Only problem is that the situation dictated a different cage for Sam and Dean. It's the same size as the other one, but it has a hard plastic base. I will have to remake the borders to fit the plastic base, which is a fraction smaller inside measurement. I get to do it X3 so I can switch the other two cages to fleece bedding. If I stick with the paper bedding, I'll be going through about 10 of the big bags a month. I get one cleaning per two cages out of each bag in these larger cages. I change them every 4th day. So fleece it is! Sammy and Dean love it and I think Scruffy and Mr Bubbles will too.
Top

Last time I took Sammy and Dean out to graze, they got into a spat. No serious battling and not blood drawn, but they did lunge at and try humping each other. It was more serious than any square offs since I've had them. They're ok in the cage together, so I can only assume it was because they were outside and the other two boars were in the other outdoor pen next to them.

I'll take them outside in a couple of days and without the other two boars and see how they do. If it's still a problem, their outside grazing days are over and I'll bring grass to them inside. I'm in a tough spot if I have to separate them permanently. I'll manage, but it won't be easy.
Top

Maybe the excitement of fresh grass and thinking the other pigs were going to eat It all set them off.

Mine had a tiff with her stuffed bunny friend one day. She was rolling her treat ball filled with pellets and it bumped up against her stuffed bunny. When the bunny moved, Lacey stepped back surprised, then went over and bit the bunny on the nose. She must have thought the stuffed bunny was going to eat her pellets.
Top

That is so funny, ItsaZoo!
Top

Could be. Sammy is one high strung little guy. Probably more than Scruffy. He's my biggest wheaker. It takes next to nothing to get him going.
Top

Something else that might have contributed to the spatting is that the room the piggies are in gets a little warm. I put a 5000 BTU window A/C in to keep it cool for them. I only have to run it with the thermostat knob on 5 and low fan to keep it the right temperature. It's really very cute to see them all stretched out, relaxing and enjoying the nice air it provides. All 4 of the guys do that.

It's set up perfectly with the air pointed away from the cages.
Top

"She must have thought the stuffed bunny was going to eat her pellets." LOL! Vicious attack piggy!
Top 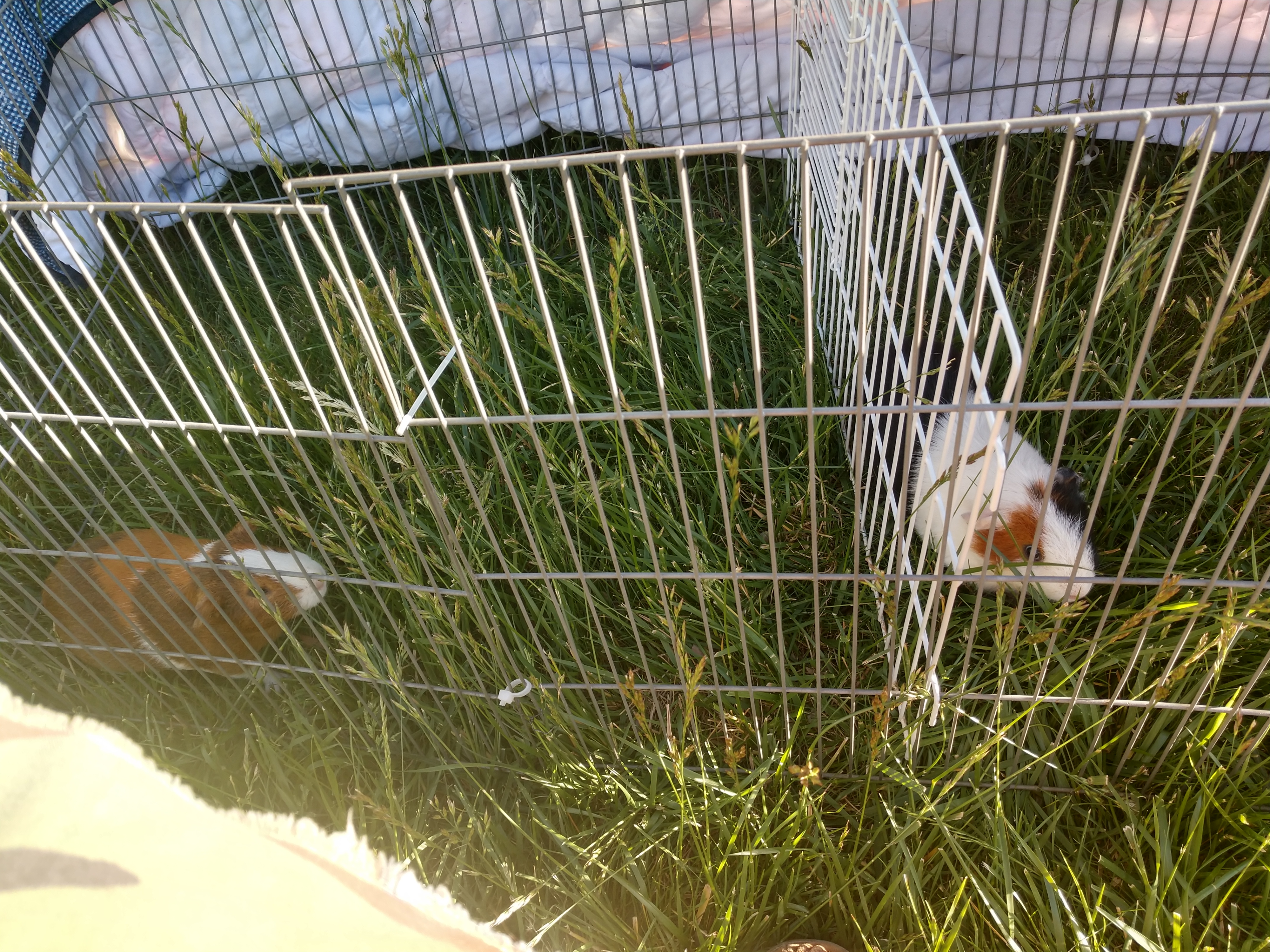 Sammy and Dean are enjoying the fresh air and green grass. I used a divider this time because I didn't want to worry about them fighting. I don't think they would since they don't when they're inside, but I don't want to chance it.

Notice that they're comfortable enough to not have the playpen. The collapsible pen is enough with the board over it to provide shade.
Top

Today was Sammy and Dean's turn for a nail trim. They both did very well. Hardly any crying or squeaking

. Both of them are healthy. Nothing noted with their hearts and lungs. Their ears were still clear. Sammy tipped the scale at 2.66 lbs while Dean weighs 2.34 lbs. Looks like Sammy might be hogging the veggies a little bit. The vet doesn't want them to be any heavier than they are now.

They both are decent sized, while not quite as big as Mr Bubbles. I think that as long as they don't go over 3 lbs, they'll be ok. Their first birthday is coming up on July 10th. I believe they are done growing. I have plans to build a guinea pig playground with tunnels, fleece forests, ramps and little platforms they can hop on. That will help keep them fit and trim. It's just a matter of making the time to get it done.
Top

We will have to see it when it is done! A fun place to exercise is a great idea.
Top

I think I'm going to just build each attraction and spread them out around the playpen rather than build a whole structure with them mounted on the base. That way it saves space when it's not being used. Space at my house is at a premium right now. I'm hoping to change that one of these days.
Top

So at tonight's veggie feeding, I watched Sammy and Dean eat their veggies. I always cut them up into medium to large sized chunks because if I don't, they steal the whole lettuce leaves, cucumber, bell pepper or carrot sticks back and forth from each other. Anyway, there's no issues with fighting over them as they let each other get into the bowl and get the pieces. What is going on is that little bugger, Sammy grabs a few pieces and collects them to keep next to him while Dean gets one piece and eats it before going back for another. As far as I can estimate, Sammy is getting between 60-70% of the veggies. He eats faster than Dean too. I think that's why he has passed Dean in the weight department.

You can't help but admire Sammy's ingenuity, but I might have to split the veggies into two bowls and see if Dean can get more of his share. As for the hay and pellets, there way more than plenty to go around, so both piggies are getting their share that. It seems like it's just the veggies.
Top

Isn’t it amazing the personalities these little ones have? Who would expect them to strategize the way they do? Mine is a little stinker every morning when I want to take her from her overnight cage and put her in her large cage. I just want her to jump up on her “loft” so I can easily pick her up. So each morning I bribe her with treats and sometimes it works, sometimes she hides. However, when I return her to that cage before bedtime, she jumps right up on her loft because she knows I only move her in the morning.

And she knows time of day. 6 p.m. is supper time for us, the dog, and her. She starts whistling at the top of her lungs in case we forget to eat. Anytime the dog is eating, we get a stern look and then the wheeking and pacing start.
Top
Post Reply 178 posts