You could try contacting area rescues to see if they have or know about any cuy. They may have some in their rescue that they don't list since they are so hard to place. Don't cuy do okay with regular guinea pigs? I'm not sure.

ETA: I just saw a post by CavyHouse on another thread. She stated:

"I've had a lot of luck too placing cuys with non-cuys. It did seem to calm a lot of them."
Top

I found hay at a local farm and he eats like there's no tommorrow. I looked up places near my parents' home and will buy the next bale from a feed shop. Thank you for the advice.
Top

I will contact the rescues in my area (there are like two). My mother won't let me do boar dating at the nearest rescue, which is 75 miles away. aI just want him to have a friend. Let me know of any cuys in the area, as I am good with mine. Not too many people understand cuys, so I will take them
Top

Reading this thread, it seems very likely that my Nippa is part cuy, so I'll add her.

No abnormalities that I know of.
She is actually very sweet! I've seen her grooming her cagemates before, and she is very cuddly once you pick her up. However, if she's made up her mind that she's not coming out for lap time, it's a real struggle to pry her out.
As far as I know she doesn't have any health problems, although I have noticed her wheezing sometimes when she's picked up. (I always attributed that to her being slightly overweight, but perhaps it's a genetic thing.)

Of course, I don't really know for sure if she's part cuy, but she surely looks the part, and I've never had any of the other pigs jump like she does. I have a small cage that I put them in when I clean the big one, and I've left the lid off before only to turn around and find her halfway across the room.
Top

I am fostering now two young adult males who are so big, they must be at least part cuy. I don't know much about them, they were found abandoned, like most guinea pigs under the care of our rescue. They are healthy and have no deformities, which is not surprising, since they are European cuys, hybrids bred exclusively as pets. They are likely brothers, because they look very similar and were found together. Each weighs more than 3,5 pounds and is about 17 inches long. They are slim and long and have massive paws. Both are American crested, that is dark haired with white crests on their heads. Their hair is middle lenght, with slight mullets. One is almost entirely very dark brown, close to black, the other has lots of beige smears/stripes/patches. The fur is light near skin, dark at the hair ends, eyes are dark, ears low set and floppy, but not excessively.
They are generally sweet natured and gentle, just as any other guinea pig, but they are much more skittish and very, very hard to catch. They are not particularly jumpy, but big, strong and once they learned to escape their C&C by pushing the grids, they are practically imposible to keep inside the cage.
My friend is fostering now young regular cavies and calls them hamsters, and mine are playfully called ponies :).
Top

Cool. Do you have any pictures?
Top 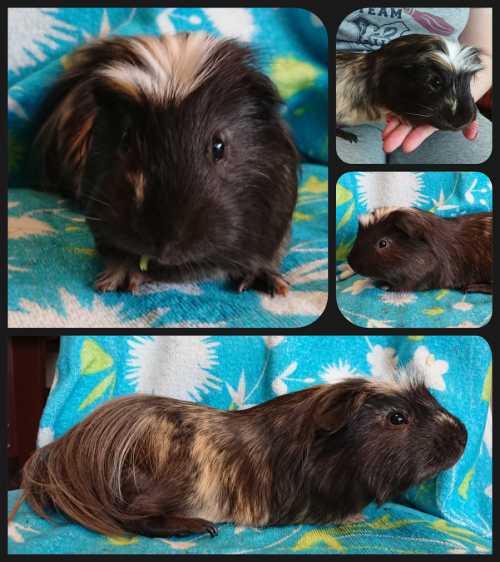 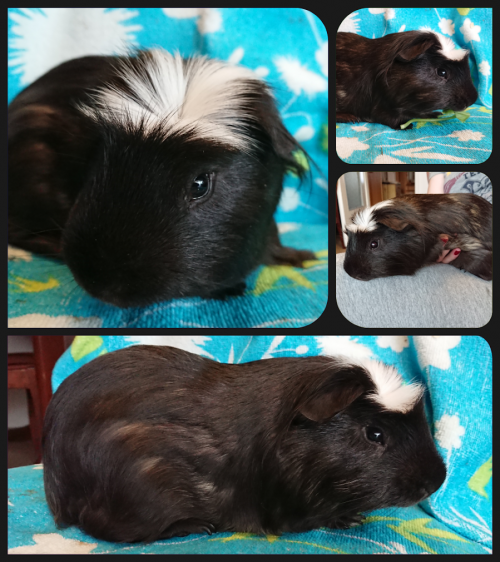 Double the fun! LOL. I'd be a little tempted to keep them, too, but I'd have no idea how to manage piggies that large and strong. What kind of housing will they need, do you suppose?
Top

Sounds like the kind of pig that needs a cage like ours...solid melamine/plexi. Although I'd be wary of them figuring out a way to jump at that size!
Top

That second pic with your hand under one of them gives an idea of their size.
Top

All these years of having piggies, never heard of these guys. However, I used to work in a pet store and we did get in a HUGE pig! I just thought she was an abnormality. People would try to guess what she was...hamster, rabbit, chinchilla... I said if you don't know what it is, you can't buy her. Someone bought her on my day off.
Top

My "ponies" are close to 5 pounds (2 kg) each now! They will come to me to be hand fed parsley or other snacks, but are impossible to touch. I decided to let them free range, lately in the company of a regular sized male who lost his companion due to old age.
Top

Are you able to catch them somehow and handle them for medical issues or is this impossible too?
Top

Good Lord, Kimera! You need to buy some little saddles for those guys. This capybara owner has the right idea: 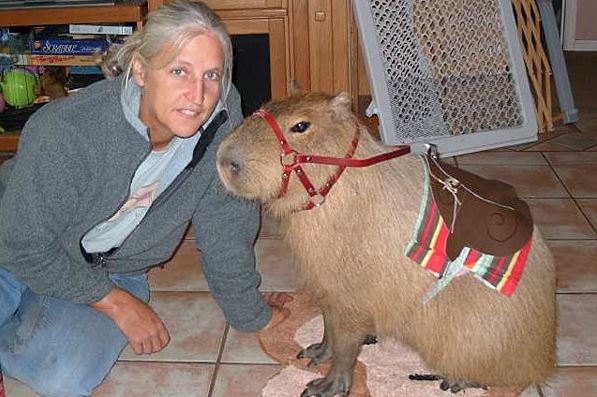 They are just gorgeous.
Top

Yes, I can catch them eventually, and once they are in your lap, they are relatively calm. It is just so hard to run after them to corner them somewhere and they squeal in panic for a moment, that I don't catch them just for cuddling - although I wold like very much to.
Top
Post Reply 403 posts