Apologies for the long absence but I have been going through a bunch of medical and domestic issues as well as having to do a bunch of traveling that has kept me offline for a while.

I could use a bit of help and advice on a few topics.

First off, completely without warning, the missus got another pig at the start of July. She popped it in with our 3 girls and they all seemed to get on ok but after 3 or 4 days we realized that the store (yes I know, like I said this was nothing to do with me) had sexed the new pig wrong and it was a boy not a girl, now named Piglet.

We separated him as soon as we realized but he manged to scale the divider a couple of time so we put him in a completely separate cage.
So the two questions here are what are the chances of him getting them pregnant during the short time they were together and if he did manage to impregnate one of our girls during the few days they were together what signs should we be looking for that would indicate this was the case? There has not been any drastic weight gain if that woudl be an indicator.

Next question is whether there is a window age wise as to when we should get him neutered so he can go back in with the girls? Also having only had girls up until now are there any things we need to watch out for specific to boy pigs. He appears to be doing well and his weight has already gone up from 313g when we got him to 931g now and he appears fit and healthy and a bit of a wheeker and nibbler.

Last question for this post. One of the girls, Chunkita has two bald patches on her back, parallel stripes in the middle of her back near her rump, I think this is caused by her gnawing at it so will probably start her on Ivermectin to see if that helps but given the concern about possible pregnancy would that be a problem? Could something else be causing it? She seems happy enough and is active and eating but noes seem to be scratching and gnawing quite a bit. Here is a picture of it. 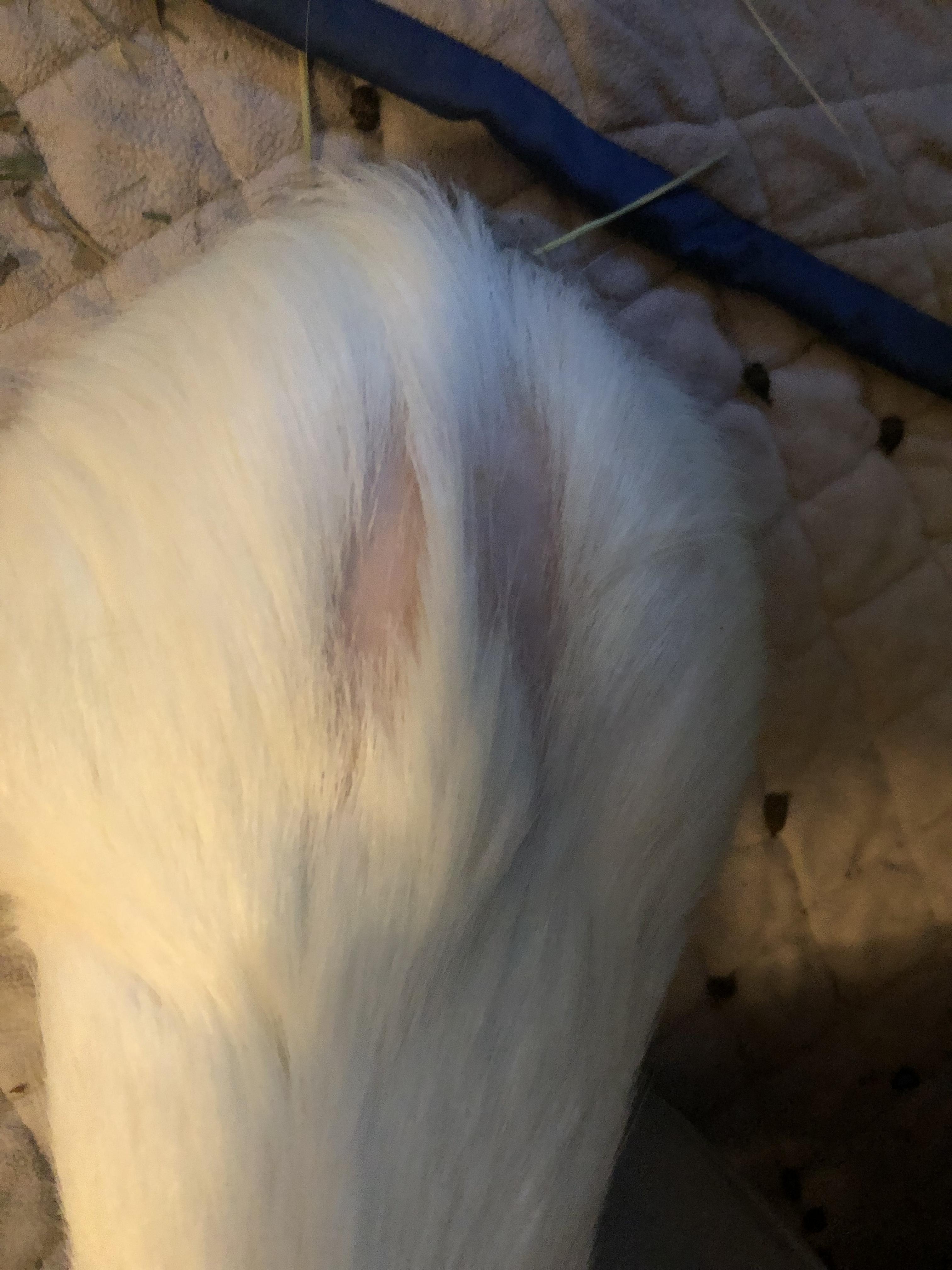 Thanks in advance.
Top

Chunkita has mites, and you'll have to treat them all. That hair loss pattern is definitive for mites, so order the ivermectin!

I think most vets want boars to be at least four months or so old before they're neutered, but you'll just have to ask.

The earliest you can possibly know whether anybody's pregnant or not is 5-6 weeks from when they were last with the male. Here's a thread I wrote for another forum on how you can guess how far along they are: https://www.guineapigcages.com/forum/threads/103012-How-can- ... along-is-she

As far as the likelihood of pregnancy, sows only come in heat every 14-16 days, so it's possible nobody's gotten knocked up.

The first rule of putting guinea pigs together is to turn them all over and compare their private parts to see if anybody looks different. :-) NEVER trust a pet store employee to sex a guinea pig.
Top

I already have the ivermectin so will get started tonight.

Last time they were together was about 9.5 weeks ago. Will check the thread thanks. I am hoping that they are all ok. As I said there is no significant weight gain compared to what they weighed when we got Piglet. Only about 12-45g so I think we are OK.

As I said Piglet was acquired without my knowledge, I wasn't very happy about that and even less so when I found out he was a boy. While I was at work the missus took him back to the store and I was even less happy about that so she got him back again. Despite the added complication of him being a lone boy among our girls I couldn't bear the thought of him being back at the pet store.

The wife and daughter were supposed to have taken him to the vet to get him neutered over the last 6 weeks but for various reasons that didn't happen. I am now on solitary piggy watch again as they are both away for a month so will see if I can get it sorted out. I already have a place in mind that is a little way out of the city but has a good reputation for the op.

I dont know if Guinea pigs have ever been cited in a divorce case before but they came awfully close this time.
Top

Then they're not pregnant. They'd be huge by now if they were.
Top

To be fair Chunkita and Nala are pretty huge anyway, (1171g and 1251g respectively) especially compared to little Suzi at 960g. But yeah having looked at the info you provided just portly not pregnant. Thanks.
Top

Started the Ivermectin on Friday, will keep applying it for 4 weeks.

Here is a picture of the new boy, Piglet, for those who are interested. 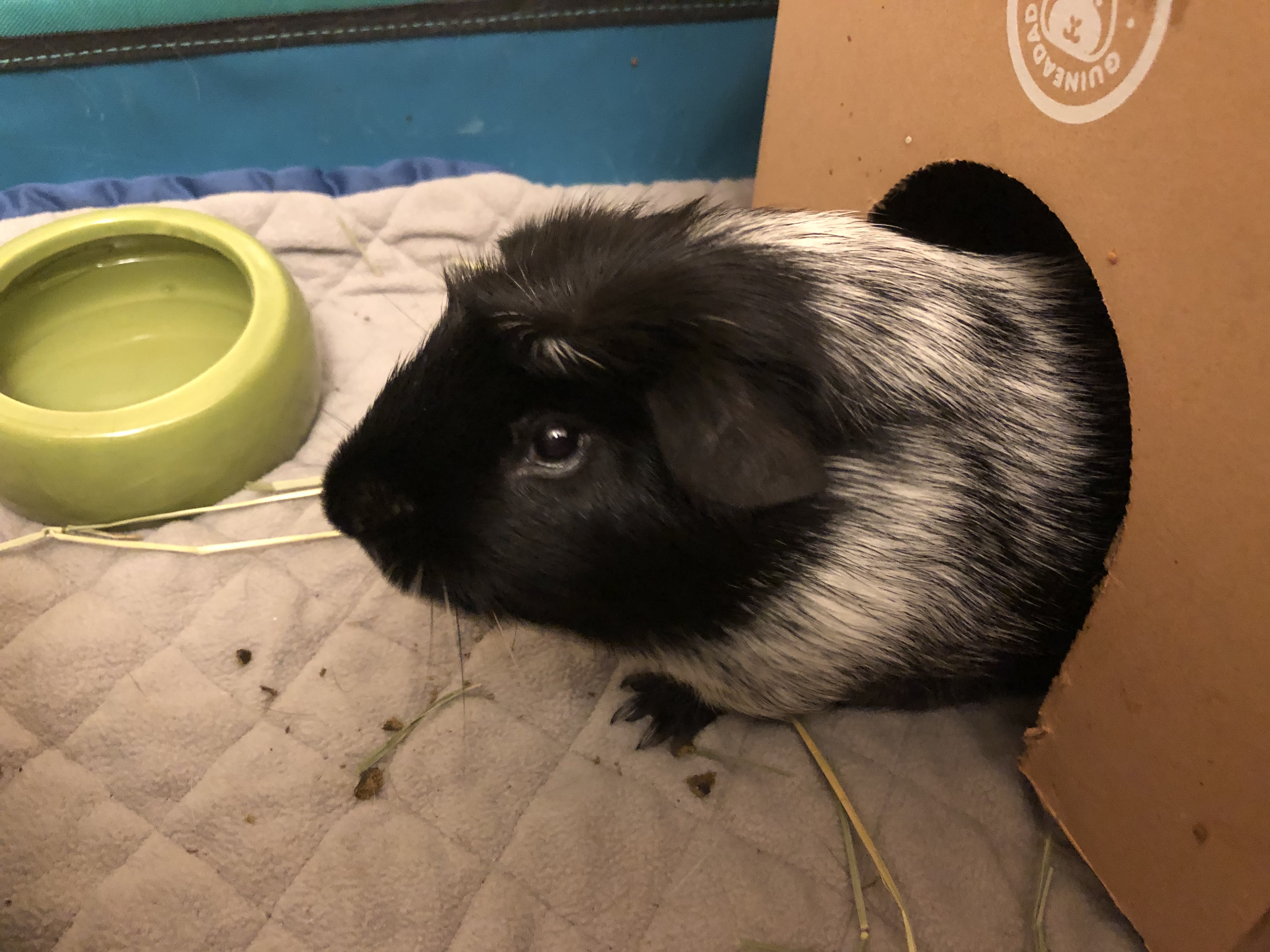 Oh, he is very handsome! I had a "dalmatian" once.
Top

He is very Vocal he also likes licking and nibbling my hands.

I need to get him neutered though so he can go in with the girls it is just a bit hectic at the moment and the only day I have clear each week until the missus gets back is Sundays and the place I plan on taking him is closed.
Top

Handsome young man! I have 4 boars and I can tell you that they are a bit more aggressive than the girls; towards us and each other. If he's the lone male, he will take a dominant role, even if he is separate from the girls. He knows they are there. They are his girls and neutering him will not change that. It will only prevent him from getting them pregnant. Be aware of this in case you ever end up with another boar in the future. Also make sure you keep him separate after his procedure long enough to ensure that sperm production has ceased and that any he has stored has been dispatched. I believe it's 2-3 weeks. I've never neutered my boars so I can't say for certain, but I've read that most of them calm down and become a little less aggressive after neutering. Good luck!
Top

And a boar paired with sows is often not the dominant one in the cage. There's a great possibility that one of the sows will tell him what's what.
Top

OK Thanks for the info.

Yes he does know they are there, he had about 4 days with them before we realized he had different "equipment" and seemed to have settled in with them and there wasn't much sign of any aggression.

All 3 girls seem to have their turns at being the boss but oddly enough the smallest one, quirky little Suzi, seems to be the boss most of the time and has no qualms about stealing food off of the other bigger girls or nosing them out of the way. She is still the most skittish of the 3 but has let me pet her a few times without needing to be under cover and yesterday I heard her wheeking for the very first time since we got them in April last year.

Chunky seems to have been his favorite as she had taken to mothering him it seems and interestingly enough Nala, who the vet told us we she consider having euthanized last year when she was ill, is now the biggest of the 3 but looks slimmer than Chunky.

I had already planned on keeping him separate for 3-4 weeks. I had been hoping that the missus and daughter would have taken care of that while I was away but there were a few other family emergencies that prevented that. Like I said it has been a hectic few months of late.

We have no plans on getting any more pigs, boars or otherwise, as I mentioned the fact that we ended up with this little chap was a complete surprise to me. I am hoping that the message about no more surprises has sunk in now.
Top
Post Reply 12 posts • Page 1 of 1