I thought she was just awesome yesterday. The Republicans are incredibly hypocritical. I hope the people of the nation remember the Republicans' treatment of Obama's nomination of Merrick Garland.

From the WaPo:
To recap, Garland was nominated to fill the 2016 vacancy on the Supreme Court created by the death that February of Justice Antonin Scalia, an icon of conservative jurisprudence.

President Barack Obama quickly named Merrick Garland, then 63, to fill the seat. Garland had long been considered a prime prospect for the high court

Widely regarded as a moderate, Garland had been praised in the past by many Republicans, including influential senators such as Orrin Hatch of Utah.

But even before Obama had named Garland, and in fact only hours after Scalia's death was announced, Senate Majority Leader Mitch McConnell declared any appointment by the sitting president to be null and void. He said the next Supreme Court justice should be chosen by the next president — to be elected later that year.


His nomination lasted 293 days and the Republicans never let him have a hearing. Now look at that in comparison with the incredibly rushed job going on with Kavanaugh and complaints that the Dems are "stalling".
Top

I too though Dr. Ford did an incredible job. She was as helpful and believable as a witness can be. I am glad she got council to oversee her (they said they were doing this pro bono).

The Republicans are a complete disgrace. Rachel Maddow took apart Kavenaugh's testimony - there are some real problems. I think they are going to find more corroborating evidence to support Dr. Ford's claim (i.e. Judge said in his book he worked in a grocery store about the time she said she saw him there, a calendar entry actually lists the people at a party that could well have been the location, the house can be identified and Dr. Ford's description of it compared).
Top

As it turns out, Dr. Ford has been a long time consultant at the small pharmaceutical company I work at. She assisted us with a grant we were applying for this past March. I do not know Dr. Ford personally as I work in a different department. My colleague, who is a big trump supporter, says Dr. Ford is a very trustworthy person. He was extremely conflicted since he is a trump supporter but also knows Dr. Ford personally from her work in our office.

I also thought Dr. Ford did a very good job and we were all streaming the hearing on our computers plus the big TV was on all day. I really hope the FBI is able to find some witnesses to corroborate Dr. Ford's claims.

My main work is in Human Resources and it is a really hard call when you have two credible individuals. Much of the decision then comes down to the witnesses In my past job, we had various complaints of harassment and/or discrimination and I hated to be called in to participate in those employee relationship issues of he said, she said. Luckily no employee issues here at my current job.
Top

What I hope is that Mark Judge remembers something and does not lie.

While this is not a dissection of Dr. Ford's testimony, it is a dissection of Kavanaugh's, showing all the lies, the evasions -- a clear picture of his unsuitability for the Supreme Court. It should be read by every Senator who will be voting:

HOW WE KNOW KAVANAUGH IS LYING

This man should not serve another day as any kind of judge…
by NATHAN J. ROBINSON
https://www.currentaffairs.org/2018/09/how-we-know-kavanaugh-is-lying
Top

Kavanaugh seems to have an anger management problem to go with his alcoholism. Trust me; I know the signs to both.
Top

Regardless what happened back in the day, he showed himself to be unfit for the job he is applying for (as many have described the point of the hearings). Yelling, insulting a (female) interviewer? It's a conspiracy? Yeah, that really shows good judgement. Also, his previous work experience prominently features supporting torture, and developing the salacious line of questioning used on Bill Clinton. And he has lied before.

That article from Current Affairs is excellent. Here's another, from a self-identified conservative who knows him: https://www.theatlantic.com/ideas/archive/2018/10/why-i-woul ... edium=social
Top

I hope Republican senators read this too.

The author of the article, Benjamin Wittes, sure does sound like a republican supporting conservatives but ends on a strong statement:

As much as I admire Kavanaugh, my conscience would not permit me to vote for him.

I hope they see what a mistake it would be to vote Kavanaugh onto the Supreme Court.
Top

I don't know if this will display, but it is a picture of the Time cover depicting Dr. Ford in her own words: 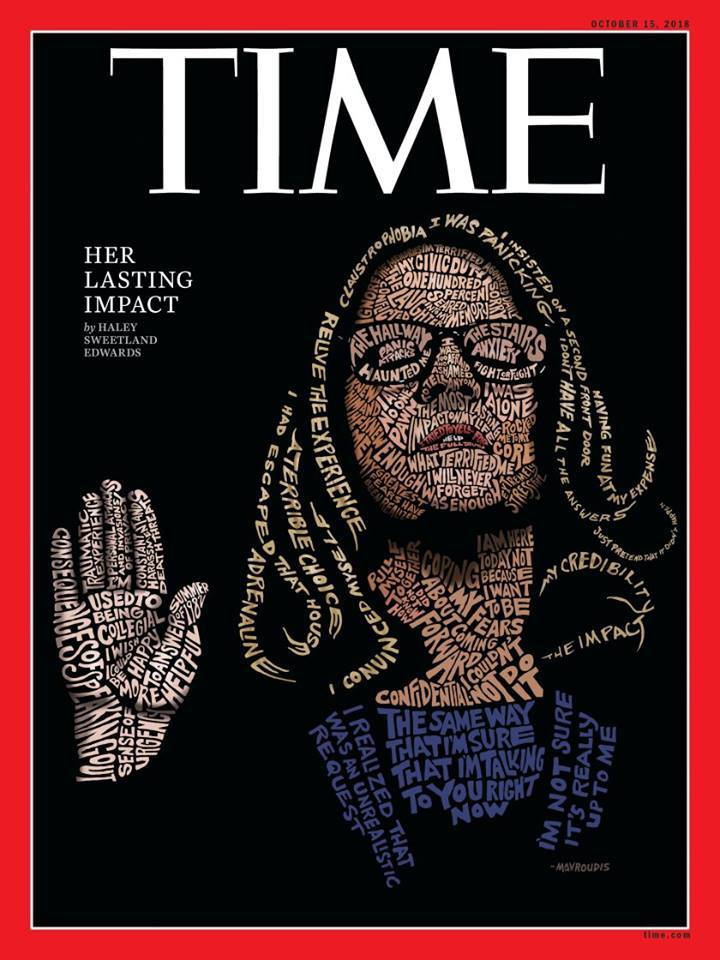 And the Time's article:
http://time.com/5415027/christine-blasey-ford-testimony/
Top

I'm devastated. More so than I've been with anything so far. I'm not sure why. The FBI reopened investigation was totally controlled by (restricted by) Trump - worthless. Bottom line - the Republicans don't care what he did back then or more recently. They just wanted to get Trump's man on the bench. And they did it. They're totally corrupt.


We have to flip the House.
Top

I'm with you, Bookfan. but the only way we can win is to get out there and VOTE.
Top

Not only the house, the Senate. McConnell (sp) dropped the required 60 votes to a simple majority (51) so they will continue to ram bad justices into the justice system.

I am/was so angry they voted him in.
Top

I guess I'm just always going to be the voice of hating the two party system even though I'm sure it's nauseating. It was Democrats and Harry Reid who first invoked the "nuclear option" to prevent filibustering of minority party and invoking the majority vote of 51 as opposed to 60. That's not a defense of the Republicans, I hate them too. It's my indictment of both parties continuing to fail the people by acting like children.
Top

I've spoken of my son's plan to become a constitutional attorney, to actually be an attorney at the table during hearings like this one. He is young but in him I see endless possibilities to do precisely as he wishes. He didn't get his intelligence from me, that's for sure, but still I try to give what little guidance I'm capable of giving someone like him, which isn't much.

I think of historical situations and the very few people in politics people who have put country first and politics towards the bottom of the list. I don't think there would be much argument that Lincoln was such a man. I believe it was Lincoln who said a house divided is a house that cannot stand. Even his adversaries at war's end had come to admire him and constituents whom vengeance to the south would be expected, like Sherman, were convinced Lincoln's plan for peaceful peace was the only plan.

Robert E Lee said, I surrendered to Lincoln's goodness as much as i surrendered to Grant's armies. Sherman who believed in hard war, fought eloquently for there to be no vengeance taken on the south after Lincoln' death. Everyone united around his fairness, his "goodness" his empathy, loyalty to doing what was right.

So we certainly have a fine example in Lincoln, i's been done before and it saved our country. Can we find that uniting person again? I don't know, I hope so.
Top

But I still say since the mid 1990's & the advent of the "Tea Party" the Republicans have more that their share of responsibility for the destruction of collegiality in Congress. And that's how it's all supposed to work "across the aisle".

I think it was Newt Gingrich who advised new members of the House to not move their families to DC & to go home on the weekends. That was aimed at interfering with collegiality.

In 2001, CNN ran a report on Karl Rove, who saw George W. Bush as a figure who could “usher in a permanent Republican majority.”.

Not exactly in the spirit of things. Which is not to say there aren't scumbags in the Dem. side of Congress.

I hadn't heard that. It's quite moving.
Top

Harry Reid had no choice. If you read about what was going on in the Senate at the time, they had to do something.
He did not use the nuclear option on the Supreme Court (if I recall correctly).
Top

It certainly is moving, Bookfan. I had never heard it either, I love it.

The Te Part is quite possibly the stupidest thing I've ever witnessed in politics.
Top
Post Reply 19 posts • Page 1 of 1