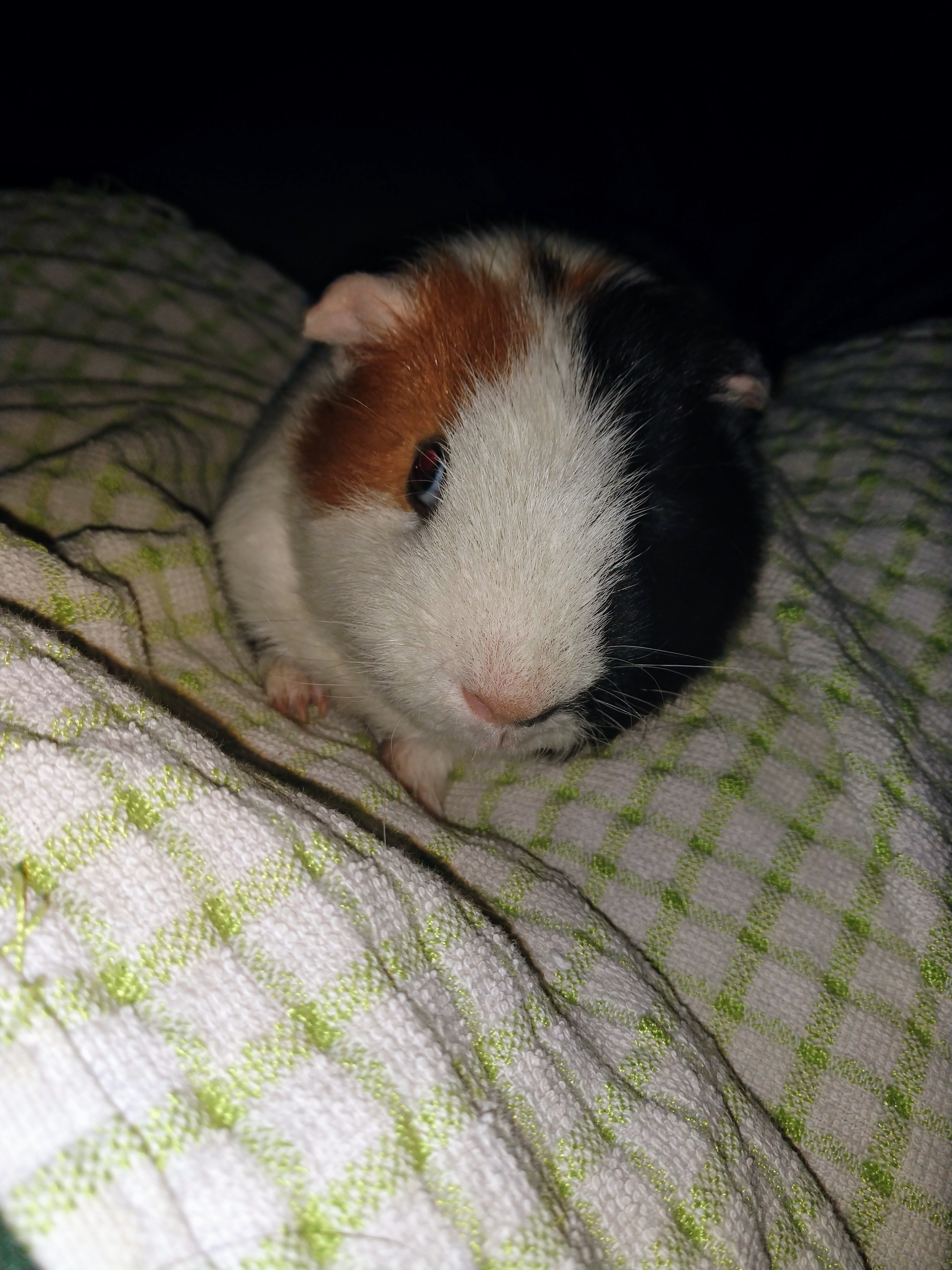 Another great day with my new friend, Dean. I'm gaining his trust. 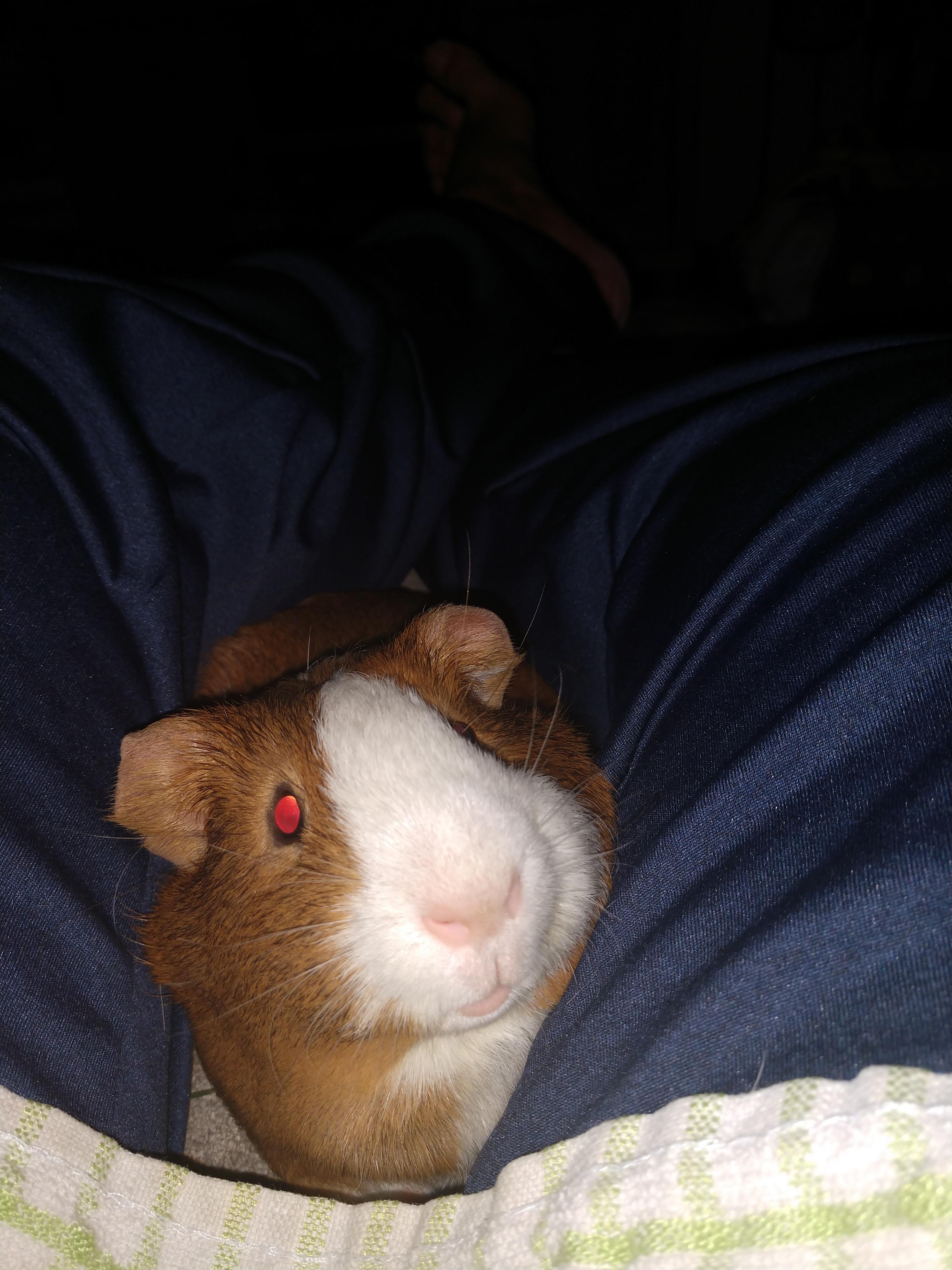 Sammy too, but he likes to nestle in and peek out.
Top

Dean stretches out and relaxes with me now. 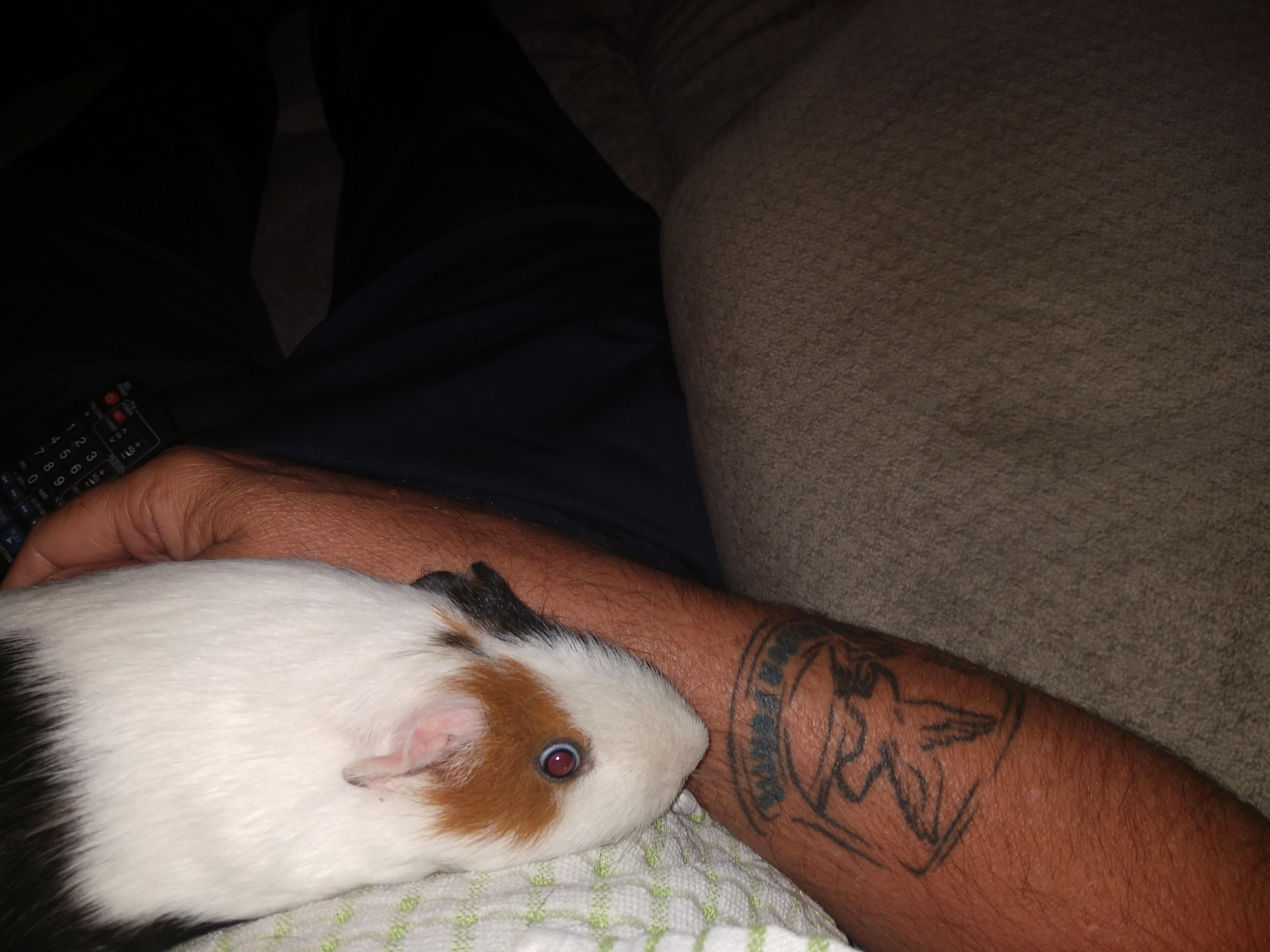 Sammy not as much, but he's still learning to trust me. 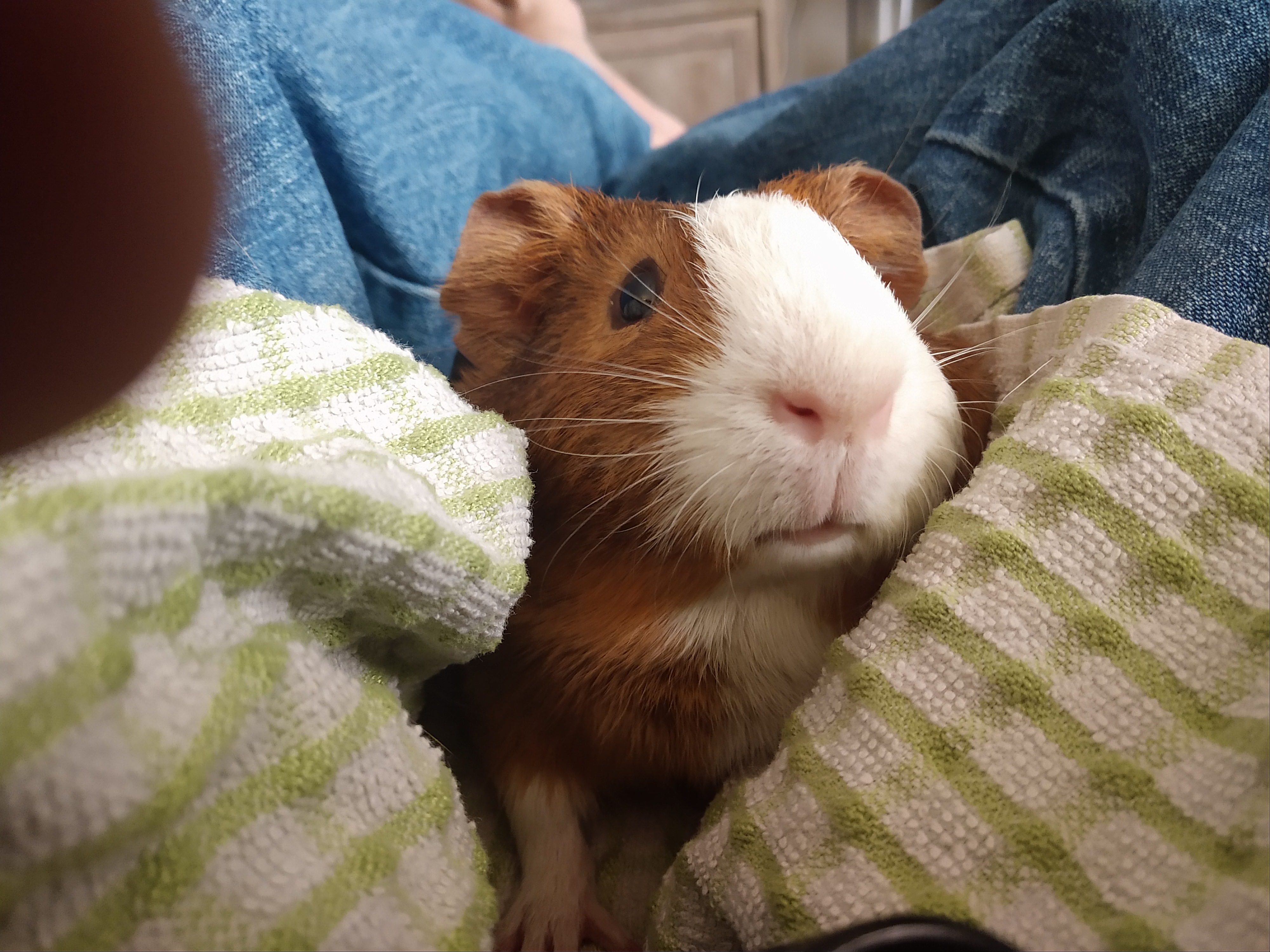 They are both so precious. :)
Top

I weighed Sam and Dean this morning. Sammy weighs 2 lbs 1 ounce and Dean is 2 lbs 3 ounces. I think that's a good weight based on their age and size, but I will know more on the 24th when they see the vet. Dean is slightly bigger in size than Sammy. Just about 2 ounces worth. For comparison, Scruffy is noticeably smaller than both of them, but not by much and he weighs 1 lb 13.5 ounces, which the vet says is good for him.
Top

I expanded Sammy and Dean's wild grass intake with the very large dandelion leaves growing in my yet to be tilled and planted flower bed and garden. They liked that very much and wanted more, but they aren't quite used to the wild stuff yet, so they only got 2 small ones each. I think their trust is building rather nicely. They can tell when I have food so they come up to the side of the day pen to meet me now. Still tricky to pick them up though, but I expect that to get better too.
Top 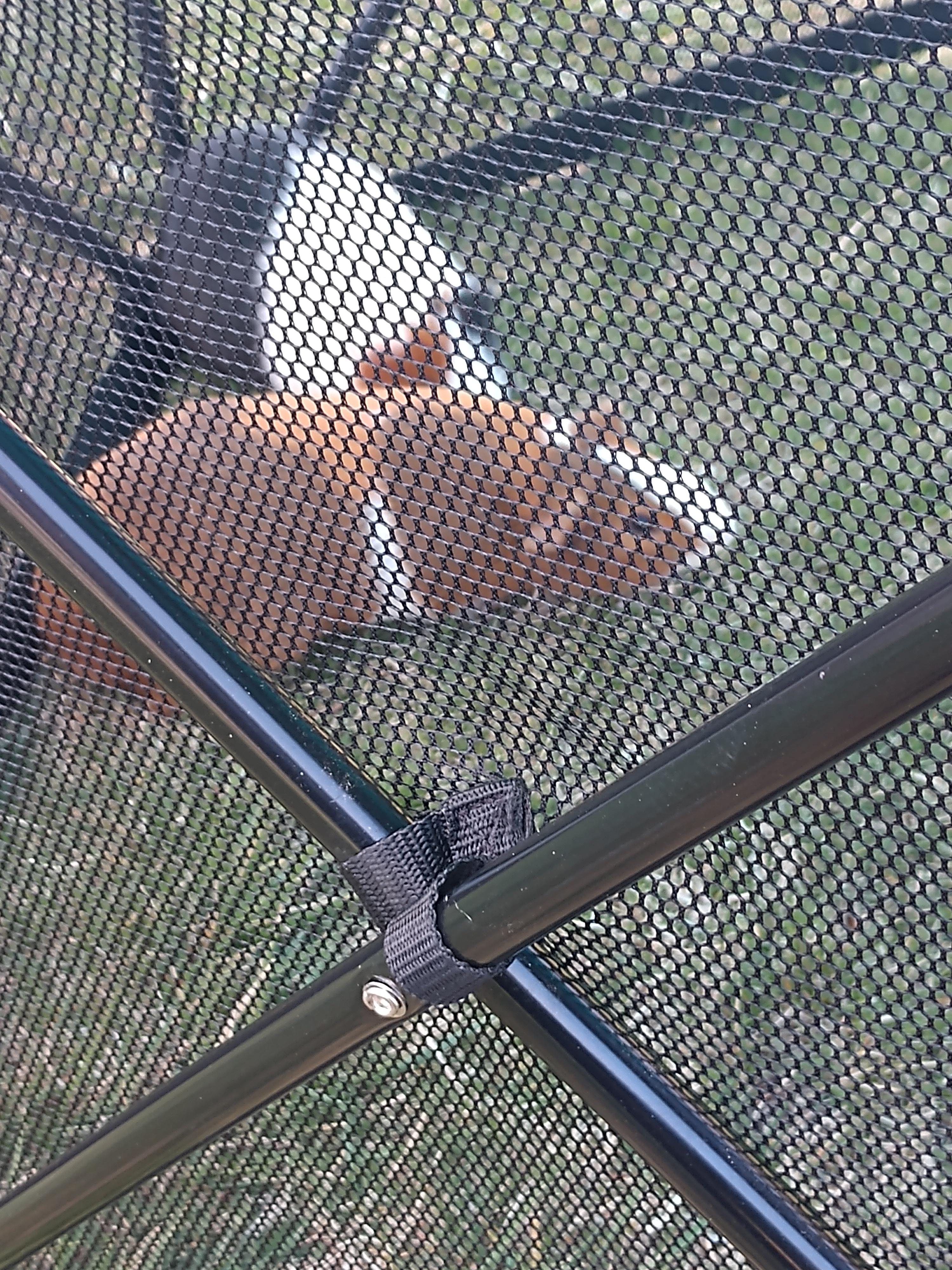 These two are pretty comfortable being outside in this covered pen. It's covered and screened. They're at ease munching on the grass in safety and shade. Both are doing that little happy squeak as they're eating. Getting used to the good life!
Top

That looks like a good solution for them!
Top

I'm so proud of Sam and Dean! They were like old pros grazing outside today. I think the baby play pen is making a big difference for them. The overhead cover and thick net sides gives them the security they need to be comfortable. They barely flinched when cars drove by. They even did that pouty squeaking when it was time to take them back inside. I'm up to 15 minutes at a time with them grazing outside now. They love the fresh air and green grass every bit as much as Mr Bubbles and Scruffy. It was evening time so it had cooled down nicely.

They are acclimating very nicely to our home and our Guinea Pig routine. Their 3X4 foot enclosure should arrive on Thursday or Friday, so we are nearly done with the back and forth between the day pen and the night cage. It is a bit of an inconvenience, but it has its benefits too. Sammy still runs from me unless I approach him slowly, but Dean lets me pick him up every time.

Their initial exam and nail trim is on Wednesday. I can't wait! That Sammy has some really sharp nails and he scratches when I first pick him up. It takes a few seconds to get him calmed down and he can leave some marks in that time. Dean holds pretty still and seems to enjoy being petted. That's cool with me because his nails are sharp too and I really don't want both of them scratching me up.

I don't think they got their nails trimmed while they were in rescue. They were there for 81 days and their nails do reflect that. Well, all of that is behind them now. They are going to get spoiled with the best care I can give them.
Top

Great progress being made! Let us know how it goes at the vet tomorrow.
Top

Ugh! The vet just called and I have to reschedule Sammy and Dean for next Friday May 3rd because the vet they put them with tomorrow isn't an exotic vet. That falls on the clerk who did the scheduling. Luckily it's a wellness check.
Top

I have been looking for a solution to the problem I was having with a shelter for Sammy and Dean. I had a sheet of polywall that I had cut a piece of and rolled into a tunnel for Mr Bubbles and Scruffy to run through or hide in during floor time. It was suitable, but not the best long term solution. They chew on it quite a bit despite the wood block I have in there for them. The houses I have for the other two won't work for Sam and Dean. They are decent sized, but not big enough for two full grown piggies to be in together.

I used to work underground utilities many moons ago and I thought that maybe a foot long piece of 6 or 8 inch PVC pipe might do nicely. It's plenty big enough to avoid them getting stuck. They like to lay in the tunnel together, so the pipe might work well for that too. Plus it's thick enough to be durable, it's safe enough for them to chew on and it's very easy to clean. I thought they might even enjoy it.

Turns out I was right. I got a two foot length of the 6" PVC sewer pipe from Lowe's and cut it in half for them. A once over with a file and sandpaper to smooth out the burrs and rough spots and it was ready to go. I put both halves in with them so they could each have one or whatever they wanted to do with it. It took a few minutes of sniffing and nibbling to figure out what they were and what they wanted to do with them, but once that was all done with, they took right to running through them and laying down inside. They both can fit in one of the pipes. I'll post pictures when they go back into the day pen tomorrow morning.
Top

The biggest issue with the pipe and fittings is peeing in the tunnel. They can become pretty stinky. Short pieces and checking often may help.
Top

Six inch pipe likely won't work if they get to be really chubby. You could go to 8 inch pipe and have enough room to put a pee pad in the bottom. They're easily washed, and keep the tunnels much cleaner.
Top

So far there hasn't been any issues. I always keep an eye on my boys, so I will make sure to check their pipes

! I could cut the bottom of the pipes out so that when they are inside, they are laying on the bedding if it becomes a problem.
Top

The new cage for Sam and Dean is supposed to be delivered tomorrow so hopefully today is the last day of switching between the night cage and day pen. The day pen is an octagon shape that is about 3 and a half feet across. It has enough room for both pigs to run around. The cage I got is 47 by 24 inches which should be plenty of room. This is the one I got:

I think they're going to like it. It's supposed to be easy to clean and maintain too. It's expandable which is always a plus. I'm going to switch to fleece bedding because it is better suited for this cage. Sammy and Dean don't do their bathroom business all over the place like Mr Bubbles and Scruffy do. When they are in the day pen they each pick out a place and do it there. That will make things easier. I can't wait!
Top

I have that cage, and it does work for two guinea pigs (I know bigger is better, but space is an issue in our new home), as long as the pigs aren't particularly territorial and they get regular floor time. I use paper bedding with mine, and I don't use the divider (which severely limits the living space). The nice thing is that the canvas bottom can be removed and washed. The company also sells replacement linings.
Top

I've heard good things about that cage and the reviews are very good too. 4.5 stars with over 3700 entries is enough to sell me on it. I think the divider is intended to be used to separate the pigs when necessary or to keep them to one side while you clean the other. I'm probably not going to use it for anything other than that. It looks like there's a ramp that comes with it to add an activity for them. I hope so but I'll have to see when it gets here. If it works out, I might get one each for Scruffy and Mr Bubbles.
Top 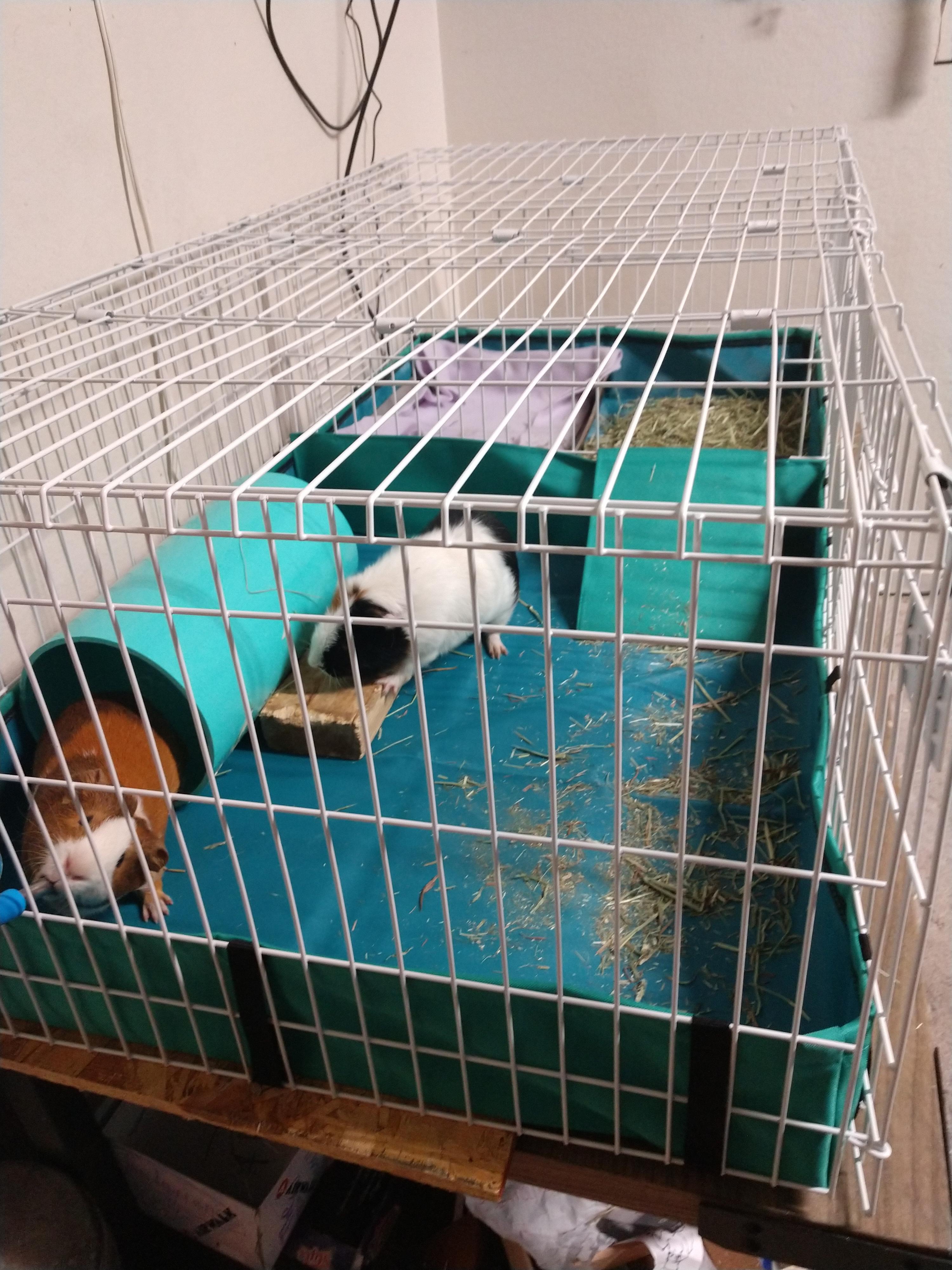 Got the new digs set up. They really like it. I went ahead and put the divider in for now because the ramp provides a good way for them to get some exercise. So far they seem to be happy running over it. Sammy likes the fleece bedding. Dean hasn't tried it yet but I think he'll like it too.
Top

Slight reconfiguration after their first night in the new enclosure. Took out the old pan with the fleece in it I had in there for them to lay in and the lined the entire thing with fleece. It was terribly messy the other way. You'd think that I would have learned that from having to clean the day pen every day :) It should be much easier to keep clean this way. I got a few of those $2.50 fleece blankets from Walmart to cut in half. It gave me enough bedding for 4 days, which makes for a very efficient laundry schedule.
Top

Sounds good. You put towels underneath the fleece, right?

I wish I could love fleece, but the years of brushing off poops and hay outside in the heat of summer and cold of winter soured it for me (made too much of a mess when I did it indoors). :\