Cage day today and I decided to get photos of my guinea pigs since it's been a while since I've posted updates on them other than medical issues. Gilligan and Skipper really hate being in the tote while I change their bedding. It's rare to see them sit still when they're in it. They usually chase each other around or climb up the side for me to get them out. Once back in their clean cage, they frolic around checking it out and then eat some of the fresh hay I always put in for them. Then they go into their tunnels to take a nap. You can see in this photo that the lump on Gilligan's nose is mostly gone and the fur over his scab is raised slightly. 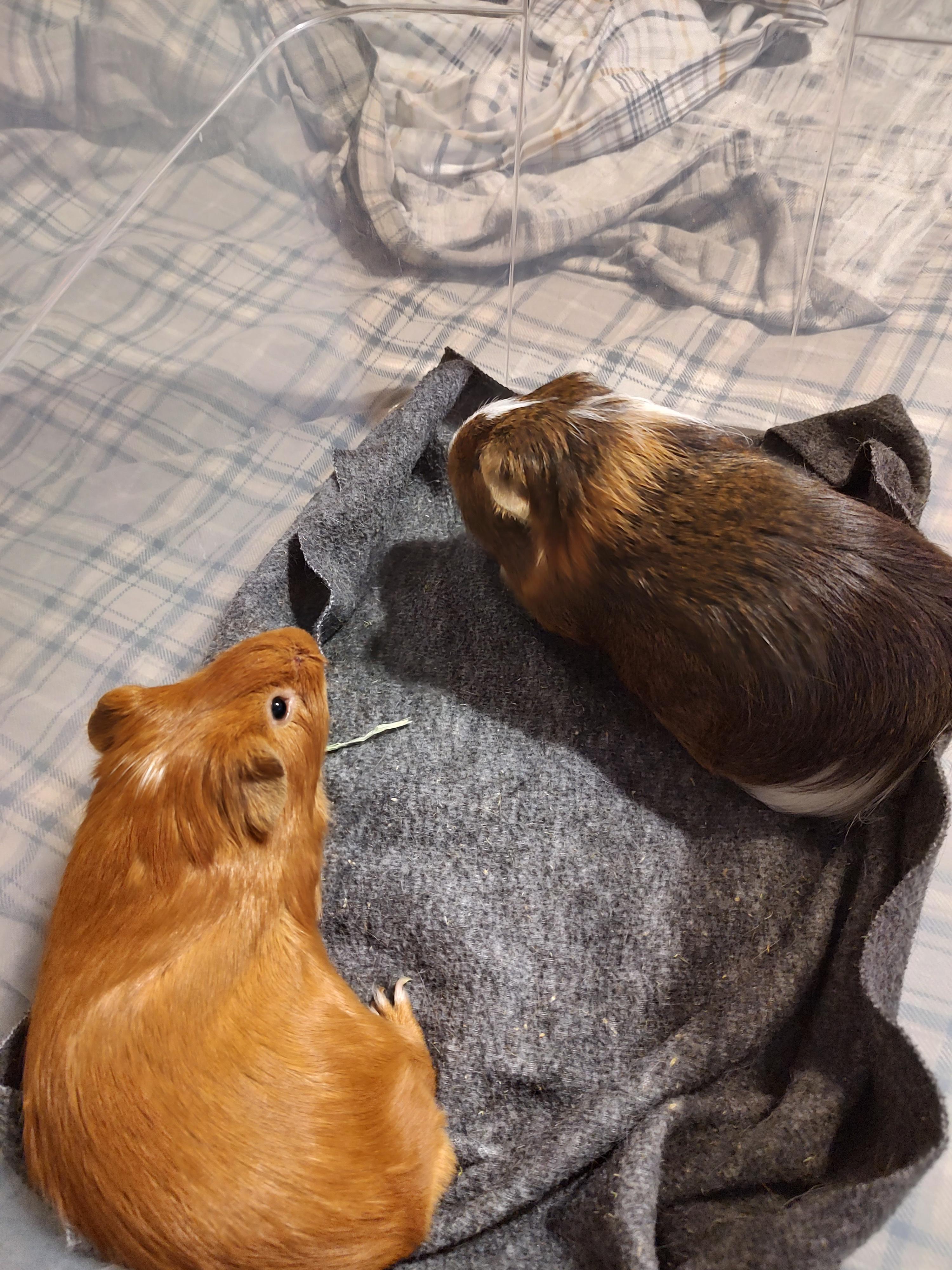 Ginger piggy really cool, calm and relaxed claiming his end of blanket. Love the white bits! The dark one love his white on butt looks like a wave, lovely colours! Reminds me of dear Jaffa!
Top

Oh my gosh, you guys! I was browsing around, looking for something else, not for guinea pigs to adopt (I can't take on any more than the 10 I already have) and I came across a one year old male guinea pig named Oreo and he looks nearly identical to our Oreo that we lost over a year ago. Only problem besides not having room for another piggie is that he's in St Louis. I'm being very honest when I say that the urge to drive the 160 miles and make room for him is nearly irresistible. Why do I do this to myself? Anyway, I thought I'd share him here. 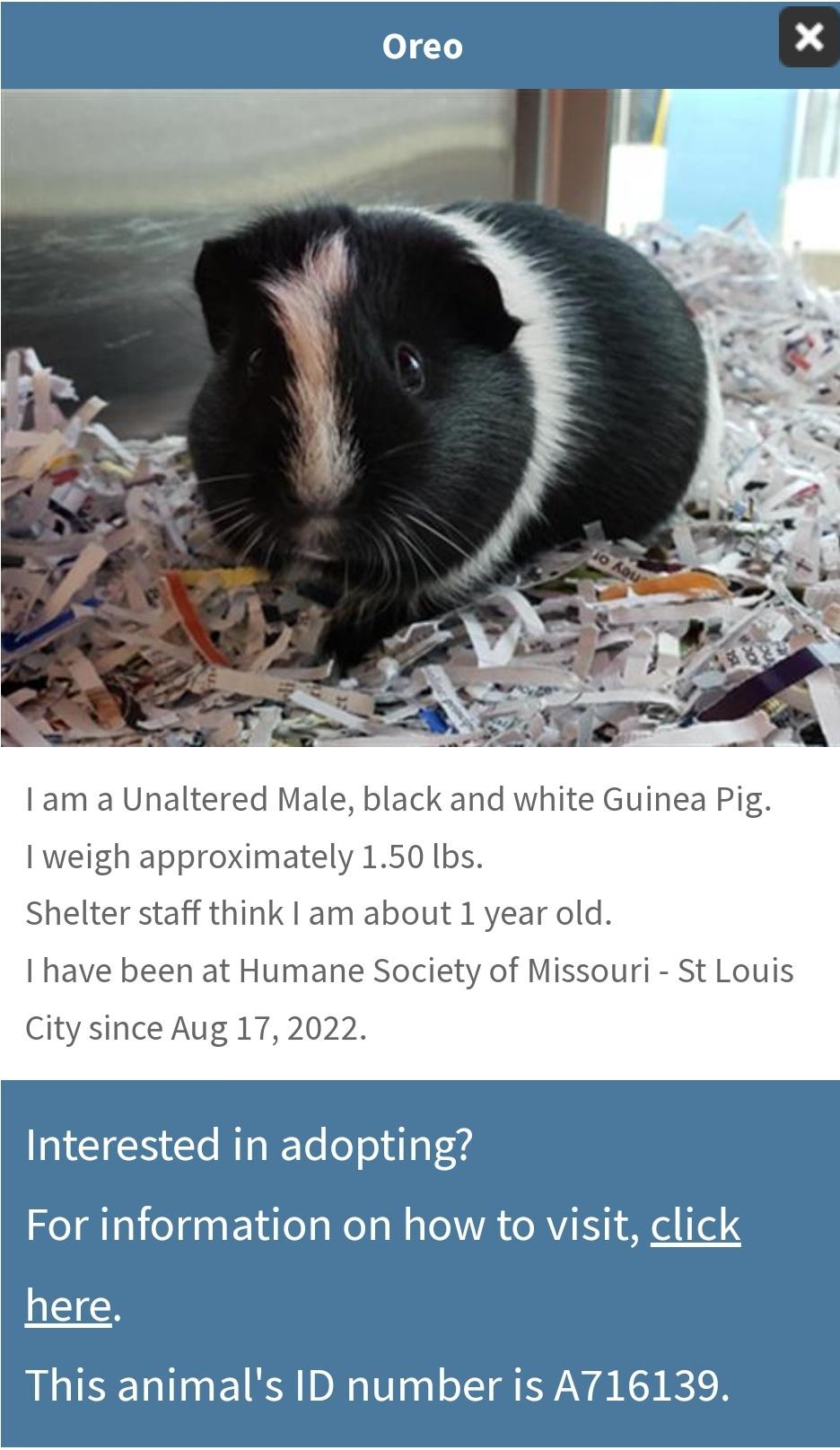 It is easy to fall in love with a guinea pig. Important to consider whether it is the right thing to do (space, time).
Top

Could this be a sign from your Oreo? You thought you had no room for Buttercup and her pups. How much more would one piggy take? What I suggest is sit down with pen and papers write pros and cons. Discuss it with your family, look at your set up and then once gone through all of that make your decision with the knowledge you have achieved. Wish you luck what ever you decide! Very handsome boy! Hope he finds a loving home! Either way!
Top

It would take $100 in gas, I'd have to get another of the big cages for him and totally rearrange my room. Even then I couldn't be sure there's a spot to put his cage. The biggest pro is that there's no shortage of love and care in our home. Like I said, why do I do this to myself?
Top

Like I said, why do I do this to myself?


Because you have a big heart!


Now I am in Australia so not too sure on this. BUT if you post in Placements that there is a piggy in St Louis MAYBE there is some in or close to the rescue, then they will travel pick up piggy and then meet someone else, then someone else until you have piggy with you. They call it a piggy train! What have you got to lose? Can not the cage go on top of cages near window?
I have bought dog crates for the boys at $39.00 each. Maybe that would help for one piggy? At floor or grass time he could see other piggies?
This may help? https://www.ebay.com/sch/i.html?_from=R ... itleDesc=0
Or this one https://www.ebay.com/sch/i.html?_from=R ... e&_sacat=0

BUT have seen your handy work I am sure if you went and bought wire and metal base you could make a spiffy cage! Think about it! NO pressure! It is up to you!
Top

It's expensive for the gas and the cage, but not prohibitive. I could swing that part. As far as stacking the cage on top of the others, that would put it up so high that I'd need a stool or ladder to get him out. The only other option would be to sacrifice my bedside table and move my oxygen machine to my wife's side of the bed. Any other way would require totally rearranging the whole room and getting rid of at least one of the storage chests and finding different spots for the stuff on it.
Top

My oxygen machine is a heavy duty roll around condenser. It's a bit heavy. My sleep apnea is mild enough for a nose cannula to be effective as opposed to a CPAP. The beauty is that I have a mile of tubing for it (exaggeration, of course 😁). It can sit just about anywhere. We'll just have to make sure the tubing is placed in a way where we don't trip on it. The bedside table is another issue. I really depend on it. My lamp, cellphone charger and pistol (for home defense) is on it, along with a bottle of water I sip on through the night. Oxygen tends to dry out my nose and throat, even with the distilled water evaporator attached to the machine.

I'm still thinking about this. Oreo isn't going to be adopted before Monday, so I have the weekend to consider everything and plan for the extra cage if I decide to adopt him.
Top

FWIW, I hope you make the decision to get him. I would hate to read that you passed on him and then in a few days you were very sorry you didn't get him. He looks adorable.

What if the tubing just went under the bed?
Top

I have enough tubing to reach my bedside from anywhere in the house. I could run it over doorways, along base boards, along the ceiling or anywhere I need to for it to be safe and out of sight.
Top

Have you decided yet? Do you have room, time, expense? I have 8 I am alone and I am struggling. I NEVER counted on the 3 boys. They were a surprise. But no-one wants them so they have a home here and some how I will find a way!

Make the right decision for you. Make sure your current piggies will not suffer if you get another. Either way hope he finds a good loving home! Keep us posted! Bless you either way!
Top

We're still reeling from the loss of Mr Bubbles and Gilligan is no exception. He and Mr Bubbles used to spend a lot of time next to each other. Their water bottles are right there next to each other. There's only about 3 inches of space between their cages; more than enough to socialize through scent. Any time one went to drink water, the other would drink too and then spend a few minutes visiting and sniffing each other out as best as they could.

Anyway, Gilligan looks a little depressed. He's spending a lot more time in his tunnel. Skipper seems unaffected, but Gilligan is definitely feeling it. He's eating and drinking fine so far, it's just that he's spending a lot more time hiding in his tunnel. We're going to have to help each other through this. I took him out to graze by himself so he could get his fill without having to complete for the best blades of grass. Believe it or not, even though there's plenty of long grass, Skipper would rather grab it from Gilligan that get his own. He seems content and is eating quite a bit of it. He'll be ok. It'll just take some time and we'll do it together.
Top

"Believe it or not, even though there's plenty of long grass, Skipper would rather grab it from Gilligan that get his own."
This reminds me of my chickens - no matter how happy they are with what they have, there will be another chicken whose pile of "treats" they want for themselves.

I hope Gilligan manages. Mr. Bubbles left a hole in his life too.
Top

It's interesting that Gillligan is grieving even though he doesn't live alone. We generally haven't seen that and that's why we aim for three pigs together (before we had babies). It's so sweet that Gilligan & Mr. Bubbles developed a bond through the bars. I can just picture what you're describing. Yeah, you'll help each other through.
Top

Gilligan has arguments with his cage buddy, Skipper. Nothing serious, just loud squeaking when Skipper gets in his face. It always ends with Skipper backing off. Not sure if that is the reason Gilligan liked Mr Bubbles so much or not. I do know that Skipper never really socialized much with Mr Bubbles. He did with Oreo, but none of the other pigs who were or are his neighbors. Wilber and Grady are next to them now and there doesn't seem to be much of anything between the 2 pairs. It's only been a few days, so maybe something will develop. For now, Gilligan prefers his tunnel. He comes out to eat, drink and say hello when I walk up. I'm hoping that the increased lap time will help him as much as it does me.
Top
Post Reply 218 posts


Are you a Guinea Lynx Fan? Tell the world on Facebook!
^
Powered by phpBB® Forum Software © phpBB Limited | SE Square Left Style by PhpBB3 BBCodes
This Document Copyright © 2002-
* Required Notice:
"Purchases made through our affiliate links may earn Guinea Lynx a small share of the sale."