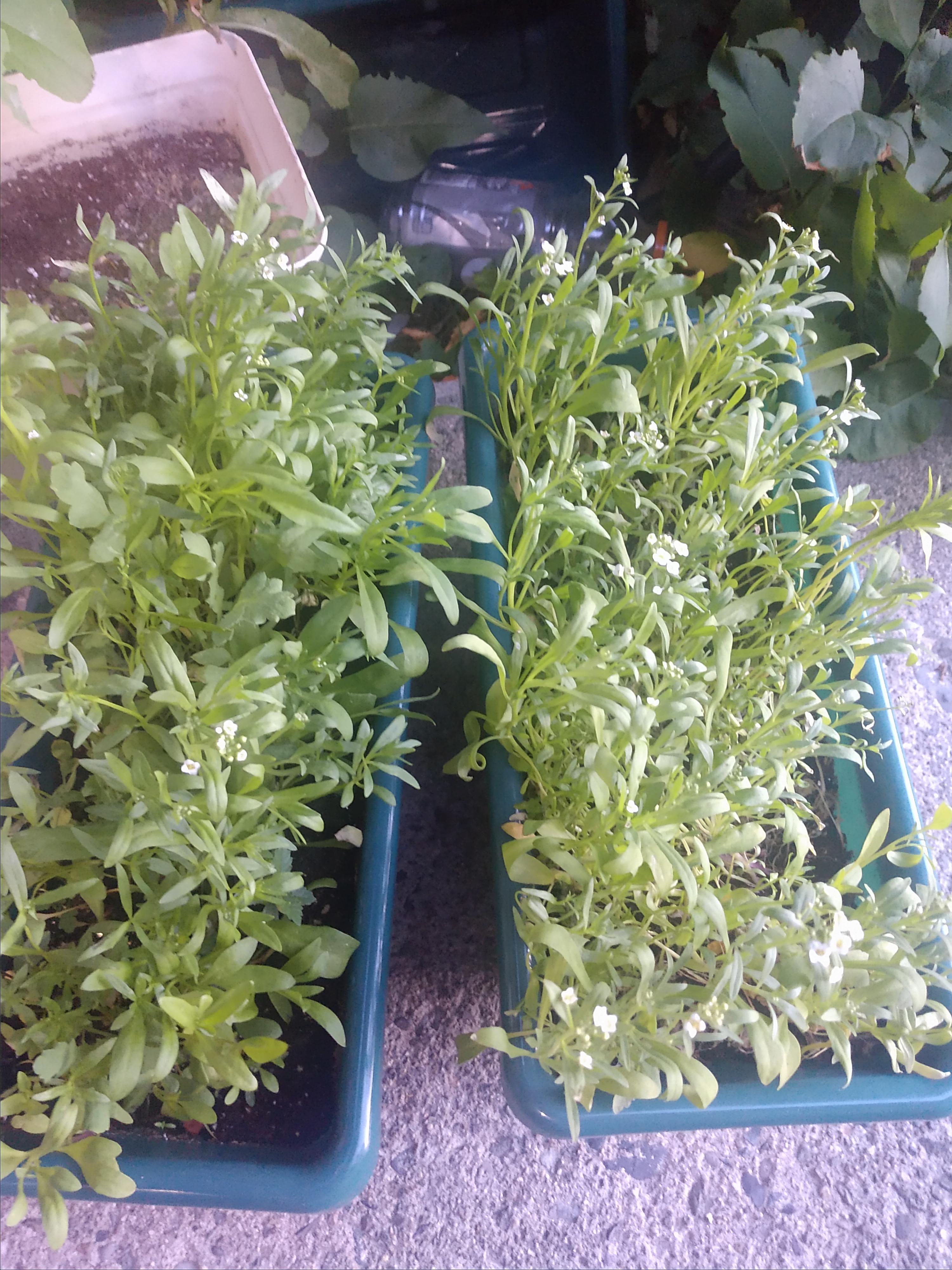 Wow! Look at Scruffy's wildflowers! I almost lost them during the cold snap last week, but I was able to get them inside where it was warm. I put them in the window so they could get the warmth and light from the sun. It's nice out again, so they're back outside and doing well. I'm glad I planted them in those pots instead of the ground.
Top

Looks like alyssom. Mr. Bubbles is adorable and a good teacher too.
Top

Last evening my daughter put nasturtium flowers in the salad. They were very tasty!
Top

I love nasturtium flowers in salad - they're so pretty and add a little peppery taste. Mine are coming up, but the chippies dig them up every once in a while so they can bury seeds.

Scruffy is lucky to have all those wildflowers. I planted leaf lettuce but it's taking its time getting large enough to harvest.
Top

Got the first bit of radish and beet greens for the garden. The wife got the radishes and beets and the piggies got the greens. Didn't think Mr Bubbles would eat them but he did. Funny how he won't eat the store bought ones but he will eat the home grown ones. I tried twice to plant lettuce and it sprouted and died right after. Guess home grown lettuce isn't it the cards. I am planting a second round of radishes and the carrots are doing well.
Top

Our first pig would only eat home grown tomatoes. And I don't mean what the grocery stores call home grown, I mean the ones grown in someone's back yard. Picky, picky.
Top

Funny how they have preferences. Mine likes regular carrots but not a fan of the baby cut variety. And only wants green peppers, no other colors and none of the small sweet peppers either.
Top

Mr Bubbles will eat just about anything. So will Sammy and Dean. The mustard greens and store bought radish and beet greens are just about the only things they don't like. They'll only pick at the kale and chard. I stay away from the gassy stuff like broccoli. Other than that the sky's the limit with them. All 3 of them get bell pepper at every feeding and eat it all.

BJ is another story entirely. He'll eat carrots, but it takes him all day to nibble down 2 small baby carrots. Same with a quarter celery stick and a chunk of cucumber. He will not eat the middle part where the seeds are, so I cut that part out. He'll also nibble on green leaf lettuce, but no other variety. His main source of food is hay and pellets. He's maintaining his 3.4 lbs of body weight on that. He'd eat a whole cup of pellets if I let him, but I only give him an eighth of a cup per day. There's always hay for him to munch; as much as he wants. Won't even sniff at bell peppers of any color.

The newbies are not picky at all other than Oreo and cucumber. He won't eat that, or bell peppers. The girls don't like bell pepper either. I try to get all of them outside at least twice a week to eat their fill of grass. Oreo, Ginger and MaryAnn don't eat much. That's only because they are still not quite accustomed to being out there. They'll eat as much as I give them if I pick it and bring it to them in their cages. The 4 boys have no problem eating outside until they get their fill.
Top

One of our vets said once that all a pig really needs is hay, water and vitamin C. So BJ seems to be doing well on just that. 'Course for most pigs veggies are a big treat.
Top

My vet said pretty much the same thing. BJ gets unlimited hay, the pellets and vitamin c drops in his water. I don't particularly like putting those drops in his water, but he drinks all of it every day. As long as he keeps that up, I'll continue doing it that way.

None of the other guys will drink their water with the drops in them, but they all get plenty of vitamin c from their bell pepper. Between Mr Bubbles, Sammy and Dean they get a whole one every day. That's in addition to the unlimited hay and eighth cup of pellets. The 4 of them go through an entire full sized bale of hay every couple of months or so. With the addition of the 3 rescue piggies, who all eat lots of it, I expect to go through a bale per month.
Top

Mr Bubbles had a nail trim today. Came out fine. He even bathed himself in his carrier on the way home. He didn't even take a nap after. Just had his hay and drank some water. I picked some fresh grass for him and all of the pigs who had nail trims. He's clearly gotten used to having his nails done.
Top

Yes! 3 more tomorrow for the girls and Oreo. It'll be their first under my care. By all accounts from the humane society and their records, they should be used to it. We'll see!
Top

The parsley I grew was ready to harvest, and there was enough for all 7 guinea pigs to get a full serving. Mr Bubbles really digs all of the homegrown stuff. There have been a couple of bell peppers come ready to pick for him and he loves those too. I even managed to get one carrot with a lot of greens on it. It was a baby carrot and between that and the greens, it was enough for everyone to get a small treat. Since BJ doesn't eat the greens, he got the carrot and the other 6 got an equal share of the greens. The cilantro will be ready soon. I bet they'll love that. Only one out of the second round of radishes sprouted and grew. That's going to be ready about the same time as the cilantro.

I've been getting an occasional strawberry or two from the plants I have. Sammy and Dean are the only ones who will eat those. It's only one or two every week, so they're not getting too much sugar from them. There were enough beet greens to get a couple of feedings out of. Mr Bubbles really enjoyed them. Funny how he won't touch the store bought ones, but will devour the ones I grow. I'm kinda flattered! I really like growing veggies for the piggies. Too bad I can't get the lettuce to grow. I might try tomatoes next year, although I've never had much luck with them.
Top

Sounds like you have quite a nice garden. This is when everything is ready at the same time.

I just planted some more leaf lettuce. When the weather gets hot it starts to thin and get rusty so I pull it out and plant more.
Top

Homegrown always tastes better. None of my piggies over the years have liked strawberries except: Pepper was in the kitchen for CC and I was cutting strawberries for my cereal. She smelled them, sniffing in my direction. I gave her a tiny bit & she loved it.
Top

It has been a while since I posted about Mr Bubbles. He just turned 4 and is doing well. He did give me a little bit of a scare yesterday. I went in to see him and discovered that he didn't touch his red bell pepper from the night before. I thought that maybe something was wrong with it, so I gave him a green one for his morning veggie feeding. He didn't eat that either.

I had a terrible flashback to the ordeal with Scruffy and got a sick feeling in my stomach. I was thinking the worst and I started really hating 2020 more than I already do. I know that Mr Bubbles is starting to get up there in age and that he's not going to live forever, but he still has plenty of time and life to live. I'm not ready to lose him and definitely not the same way I lost Scruffy. 2020 has been bad enough without losing my best piggy and little buddy.

Once I started looking into this, I realized that he had made short work of the lettuce he gets to go with the bell pepper. I gave him a bit of cilantro and he ate that right away. Same with every other veggie and his grass. Man, does that little guy love his grass. His water, hay and pellet intake is normal. His urine and feces output hasn't changed either. He's not showing any physical signs of illness; no tenderness in his abdomen, no discharge from his eyes or nose. His activity level hasn't declined at all. He still runs up to greet me with a squeak and a cage nibble. He also jumps into my arms when I reach for him and once I pick him up, he still nestles under my chin and purrs for me.

So I guess it turns out that he's just tired of bell pepper. That's understandable considering he's had them virtually every day for the last 4 years. I'm giving him a couple of days break from them and giving him carrots and cucumber on alternating days to go with his lettuce.
Top

It does sound like he's otherwise fine/eating normally.
Top

This may be more serious than I thought. Mr. Bubbles didn't want anything to do with lettuce today. He did eat his cucumber, along with some hay and fresh grass though. He not very active this evening and he's squeaking like he's in pain when I hold him. Same thing Scruffy did the night he died. I'm really upset here. I can't get him to the vet until morning. If he doesn't eat his night veggies, I'm going to try hand feeding him critical care. He doesn't have any discharge from his eyes or nose. Haven't seen a lot of feces output so it looks to be a digestive issue. I'll try to keep posted.
Top