Mine have been spoiled so badly that they get upset if they can't go out. Those two and Mr Bubbles especially. They think that it's time to go out every time I walk into the room. Mr Bubbles jumps out of his cage and into my arms when I open the door. I almost dropped him once because I wasn't expecting it, but I've since learned to be ready to catch him.
Top

That is enthusiasm! I would make the area around the cage a little softer in case he aims poorly.
Top

I'm sorry to report that Oreo has taken ill. His eyes started having a thick white discharge on Friday and then this morning when I got up to feed him, I noticed that his breathing was very labored. It looks almost like he's convulsing. It's Sunday and no after hours vet services so I have to try and keep him as comfortable as possible until morning.

He didn't eat his AM veggies either so I'm giving him critical care. He is very resistive to it for some reason so we're taking it slowly, giving half syringes and spreading it out so I don't injure him or upset him any more than necessary. I am very worried if he'll even make it till morning. I'm doing everything I can, but he looks and sounds bad.
Top

Sad to report that Oreo passed away about an hour after my previous post. I had been checking on him every 30-45 minutes and at around 10 PM I found him laying at the front of his cage with his head propped up on the side of it. As soon as I opened the door he got up and moved to the back. I picked him up and held him until he passed quietly about 10 minutes later.

I am shocked at how fast he went. Just last night he was breathing fine and ate well and less than 24 hours later he was gone. As far as I can tell, he wasn't in any pain. There were none of the classic signs of it like squeaking, struggling or anything else. He was just struggling to breathe and his eyes had some discharge. His nostrils were clear. If his age was accurate when I adopted him, he was about 4 and a half when he passed.
Top

I am sorry to hear this! Especially so soon after losing BJ. I believe BJ went to prepare a place for Oreo. What a comfort for him leaving this world in your arms safe and secure and hearing your voice. Glad he didn't suffer.

RIP Dear Oreo. Run free and popcorn in paradise munching on the green grass with BJ. Play nice and behave! Sending big hugs. He knew how much you loved him and he loved you!
Top

I am so sorry you lost him. It sounds like this was rather sudden. You have our sympathy.
Top

Thank you. It was very sudden. Respiratory illness tends to take these little ones very quickly, especially when they start getting older. Oreo was about 4 and a half . Once they hit that 4 year old mark, we have to really monitor them. I really wish there was an after hours vet around here. I would have taken Oreo in if there were. I felt so helpless as all I could do was try to keep him comfortable because this came on Sunday. Even worse that it was Easter.
Top

I am so sorry. I'm glad he got to be with you when he passed.

Guinea pigs getting sick on weekends is so stressful and yeah, helpless is the word.
Top

Oreo passed away unexpectedly on Easter Sunday from a respiratory illness. As all guinea pigs are unique in their own way, so was Oreo. He was perfectly named as his markings show. His uniqueness was in that he was completely happy doing his own thing. He wasn't much for socializing with the humans, but I could still count on him for a nice greeting whenever I approached him. He did like to be near, but not in the same cage with the other guinea pigs. He played with his neighbors through the wires all the time. 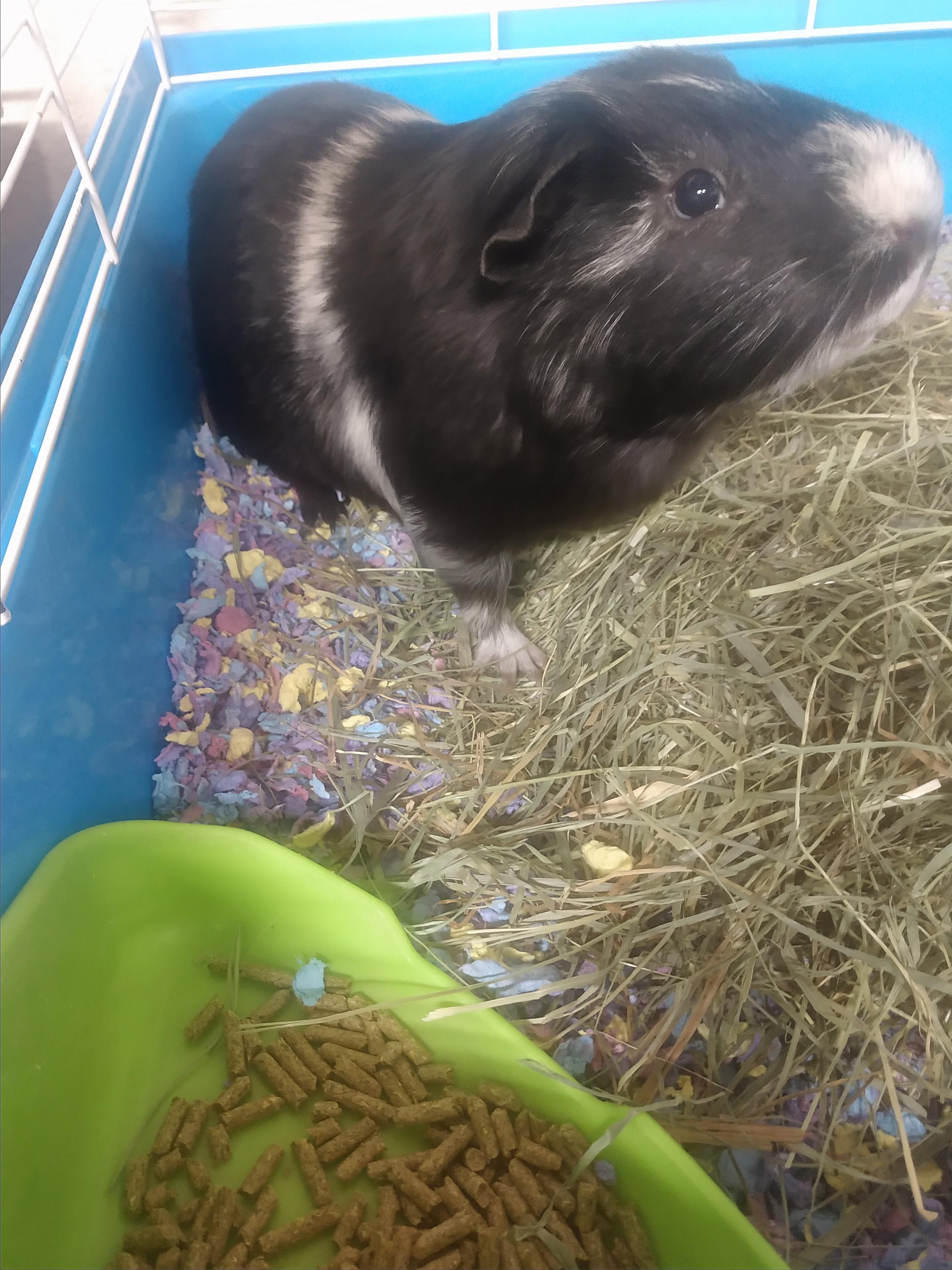 This is him the day we brought him home. He wasn't afraid of us, but he wasn't quite ready to let us pick him up just yet. 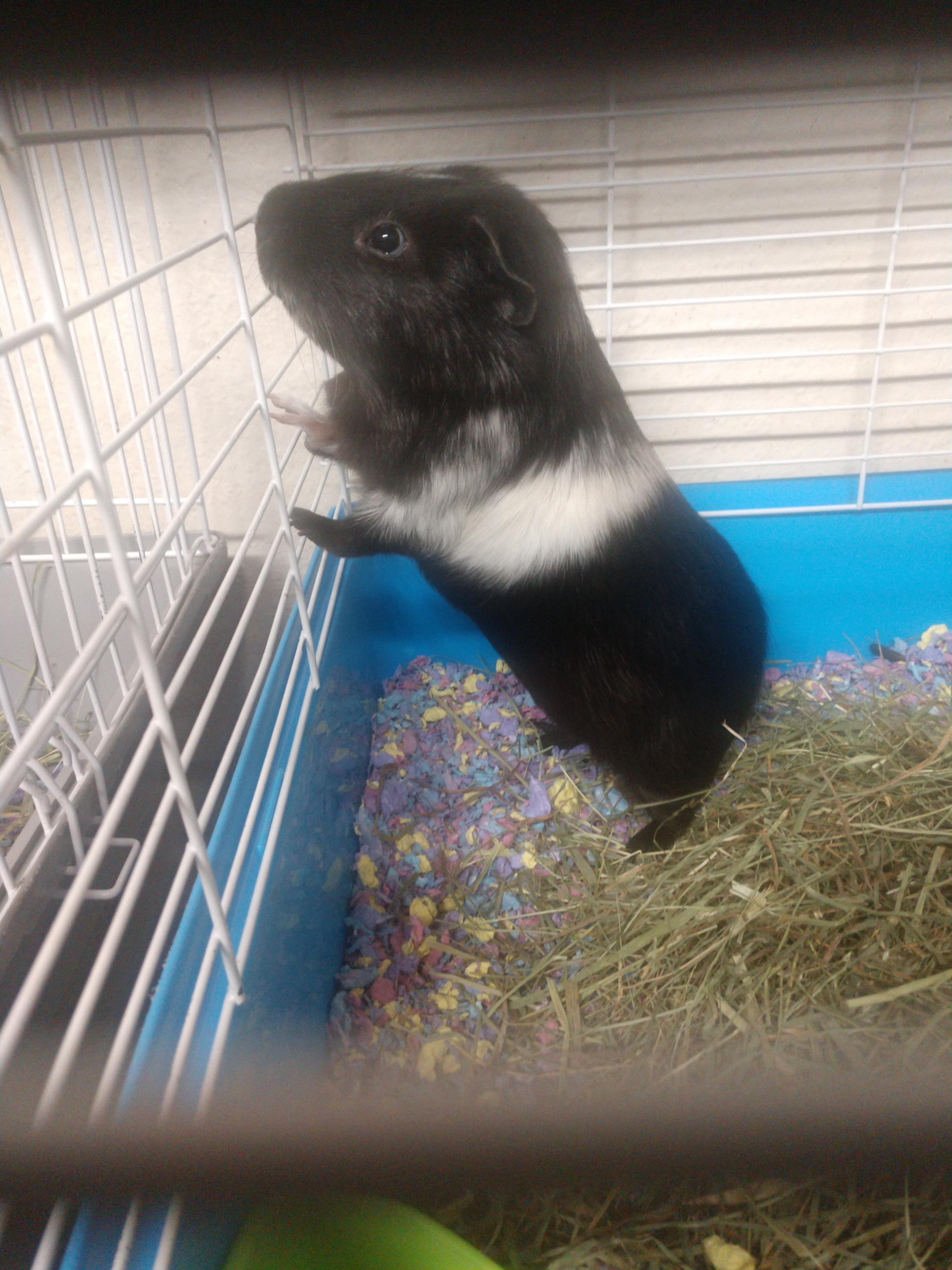 Here he is trying to get Gilligan and Skipper to come over and play or touch noses with him. Of course they were still pretty scared with me standing there. 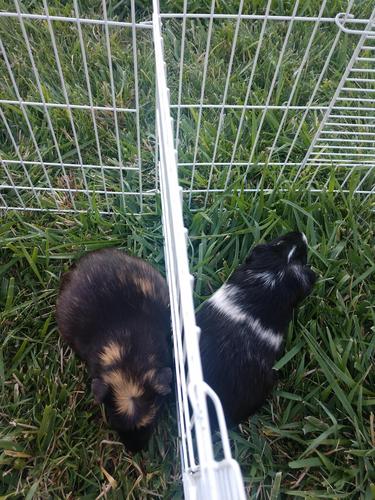 With his favorite grazing buddy, Mr Bubbles. He always followed him around and ate next to where his buddy was eating. 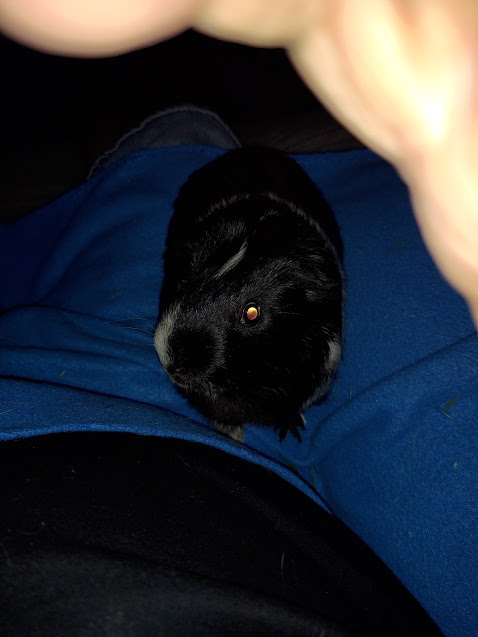 Lap time with Oreo was premium . He didn't care a lot for it like the others, but he did allow us to hold him for short periods of time. He cared more for giving and receiving his love and attention from inside his cage and he got plenty of it from in there. Getting him to sit still for laptime photos was hard. 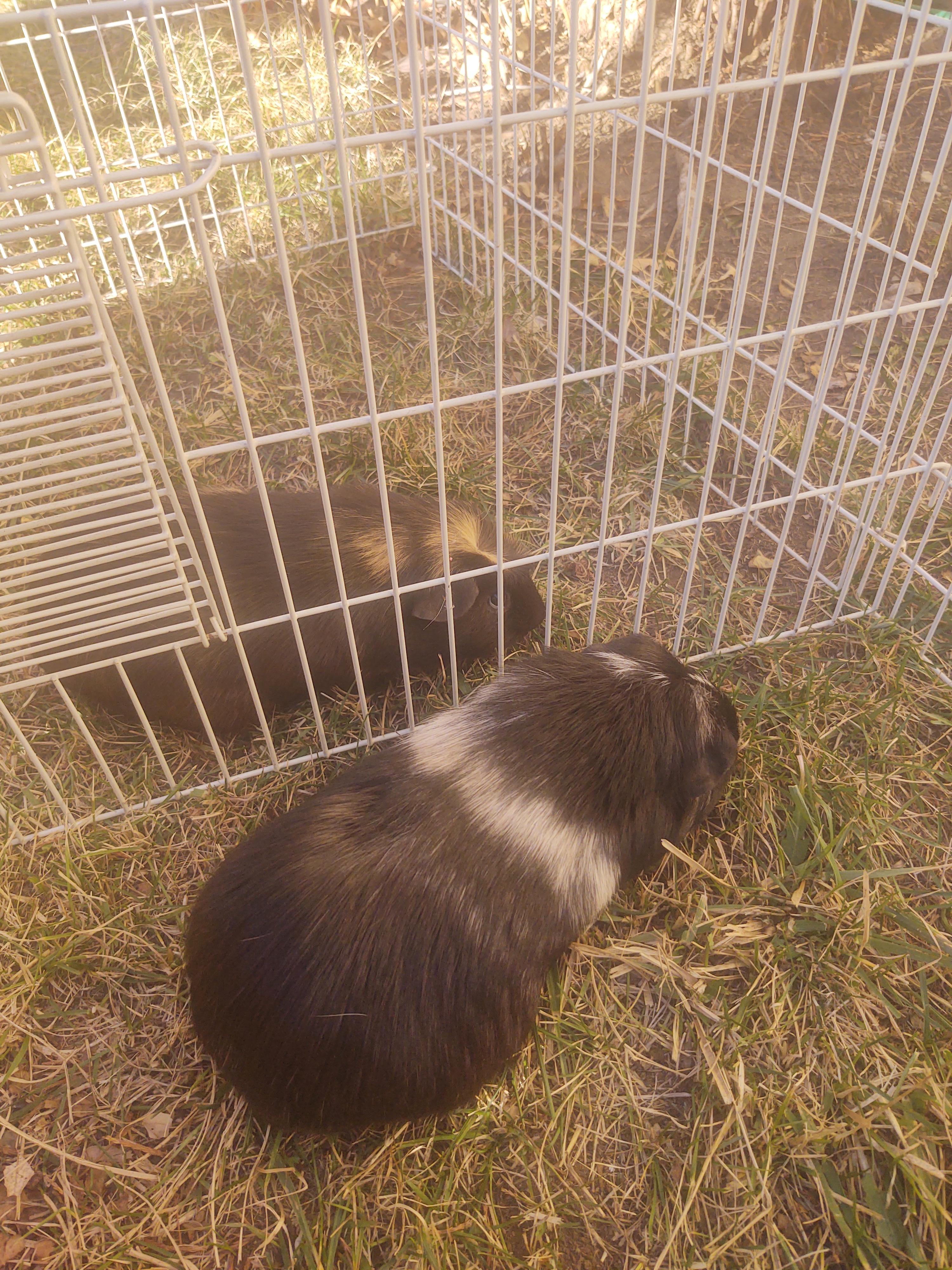 This is the last time he was outside. It was a few days before he got sick. You can really see how much he loved being out there with his grazing buddy.

He loved to go outside and graze as long as he had the company of one of his brothers. He was ok grazing with BJ, but liked to be outside with Mr Bubbles the most, who is the closest that Oreo ever came to having a cage mate. They did a lot of grazing together. I never understood why they wouldn't pair up.

Even though he wasn't big on being held, he was still a very sweet boy. He was never afraid of people as a lot of new additions are. He actually enjoyed taking a moment to give a finger nibble to show that he loved us, especially around veggie time.


I picked up his urn and certificate today. It was very emotional as the entire family welcomed him home. I am preparing his final resting place next to Scruffy and BJ. Although he never knew Scruffy, I know they would have loved each other. The 3 of them are together in green pastures, free to graze and popcorn together. I will miss him always Rest in Peace my little Oreo Cookie.
Top

What a lovely tribute! He was a really special little man and he has left you with loads of lovely memories! Hope all three are having fun together and behaving themselves. RIP Oreo and have fun! You were loved and sadly missed!
Top

"He always followed him around and ate next to where his buddy was eating." That is so sweet.

I'm so sorry about Oreo. You have my condolences, Renonvsparky. He was indeed a very special little guy who had a wonderful life with you. Such a nice tribute to him. Take care of yourself.
Top

There was a minor 4.8 earthquake here this evening. It affected Gilligan the most. It took him the longest to calm down. When I went in to check on him he ran to the front of his cage wheeking his head off. He usually wheeks when I come in, but does it from the back of the cage and waits until I approach to come out. He also climbed up my arm rather than going to his usual corner to get picked up. He snuggled under my chin and squeaked in protest for a minute or two before he calmed down and wanted back in his cage.

We get minor earthquakes from time to time, but the fault system that runs under us isn't anything close to what's under California. I know most pets don't react well to earthquakes and while they do upset the boys, none as much as Gilligan.
Top

Not many earthquakes here! I can understand Gilligan being upset. Nice to know he trusts you enough to know who to go to for comfort.
Top

I've invested a ton of my time and energy into these guinea pigs. I don't regret one single second of it. It's times like this when I get a return on that investment. There's nothing more satisfying than getting to watch them go from being scared little creatures to fully trusting, loving companions.
Top

Just catching up and read about Oreo--very sorry.
Top 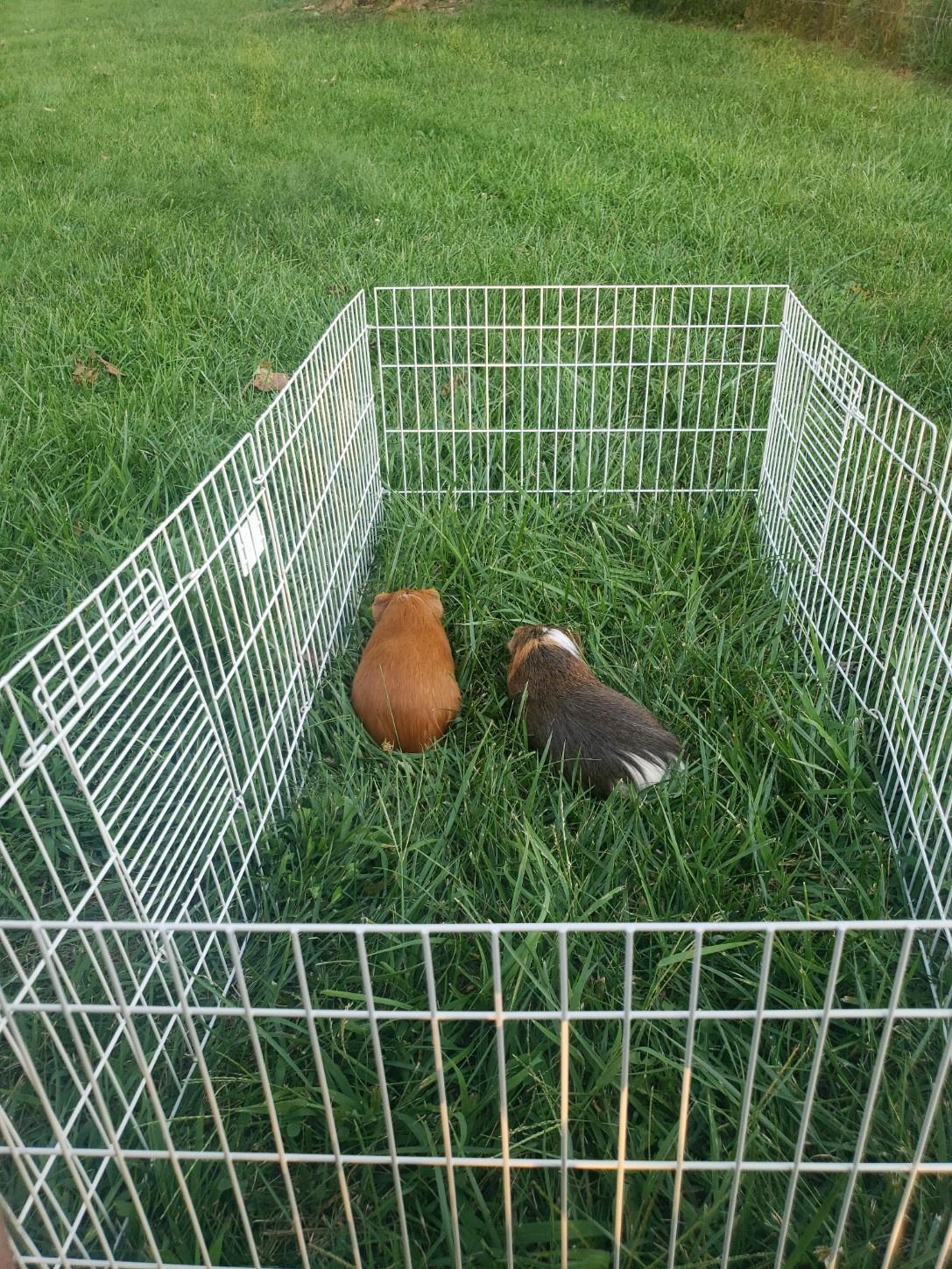 Finally got some of the piggies out in the lush grass. Oreo and BJ would have loved this. Gilligan and Skipper sure enjoyed it.
Top

That looks wonderful! We're in a drought and grass is rare. Lucky little piggies.
Top

What I imagine you doing is setting up a movable/mobile cabana so you can relax in a chair and share the vast greenness with the guinea pigs!
Top
Post Reply 202 posts