I have some pest control to do before I can do that. Starting with the 6 foot black rat snake in the barn. Short stays outside, away from the barn of 15-20 minutes once or twice a week with me standing watch over one or two piggies at a time are fine for now and not for the little ones. Until I address that problem and figure out a solid overhead protection, they'll be relegated to me picking the grass and bringing it in to them.
Top

Black rat snakes are generally good snakes to have around (they will eat mice and rats). An unattended guinea pig unfortunately would also make a meal. My chickens have not had problems with the black rat snakes but I did have one that "ate" a fake egg (much to his/her regret).

Awful story: our Clemmie was living at the Wild Bird Sanctuary, for some reason. A snake also lived there & got loose and ate Clemmie's cage mate.
Top

That had to have been traumatic. Hugs to Clemmie!
Top

You all probably know by now that I take zero chances when it comes to the pigs.
Top

We know you dote on your pigs. :) I wish all pig owners were such good caretakers.
Clem's been gone for several years, but she can receive hugs at the rainbow bridge.
Top

I can see Clemmie frolicking along in the endless green grass with Scruffy, BJ and Oreo. No predators, no sickness and no worries. Only grass to eat and lots of playing needing to get done.
Top

Ugh, what a horrible story about Clemmie!
Top

Can't even imagine how frightening that was to Clemmie.

I would have a hard time being nice to someone who made a comment like that. I don't even want to entertain the thought of anyone doing something like that with any guinea pigs. That's why I have 12 of them instead of just the two I origially started out with. I didn't want to mention anything about it, but I have my shotgun and my Beretta handy to deal with any predators who make the mistake of coming after my babies; furry or human alike. I'm fully trained to use them safely and properly by the military too, so don't worry.
Top

He was just trying to press my buttons.

What he didn’t know was years earlier I worked with a guy who never matured past the age of 12. So every day was adolescent day complete with his pranks and comments. In fact, the job was available because the former admin assistant took a demotion just so she wouldn’t have to work with him anymore. That’s where I learned the art of snark. Sometimes my mouth responds before my brain engages, but it keeps people in line. :)
Top

Sometimes my mouth responds before my brain engages, but it keeps people in line. :)

Yes but sometimes it can back fire and you lose the one you love and you end up living alone and isolated. I now try to treat people with love(what ever that is) and kindness. If get angry I try to count to 10. Being alone is a fate worse than death especially when one doesn't and is too scared to drive! You catch more flies with sugar! If ignored most lose interest!
Top

We all need more kindness and I applaud you for making that effort. I’ve been trying the same since there’s a lot of anger around right now. And although I try to find humor in most things, I’m a natural-born smart aleck which surprises people who don’t know me.
Top

Humor rocks. When I walk, I often listen to podcasts and The Moth I occasionally really laugh! Such a wide swath of people and experiences. We are all human.
Top

I love The Moth!

Another awful story about snakes & pigs. Some of you might remember Bytxlaura (something like that). She went into a pet store for something & saw some guys with what she thought was a skinny getting ready to feed it to a snake. She offered to buy him, brought him home & named him Lucky - lucky indeed. Turns out he wasn't a skinny. He had a terrible case of mites.
Top

I’ve listened to The Moth on occasion but I never set up a regular schedule to download it. The only podcast I download faithfully is Car Talk. I can listen to them multiple times just for Tom’s laugh.
Top

Gilligan and Skipper are both doing well. They're almost 2 now. They are still having regular brush ups though. One would think they would argue over the food or water, but they don't. The confrontations are over the darned hammocks! There is one for each of them instead of a tunnel like the rest of my guinea pigs have. They prefer them to the tunnel. They lay in them and under them. I don't understand why they don't each take one and enjoy them. Whichever hammock one of them takes, the other wants despite the fact that there's another perfectly good empty one. There's no fighting. It's just Gilligan squeaking loudly at Skipper followed by them setting down and laying together under one.

All of that going on, but if I take one of them out of the cage, the other gets nervous until they are together again. It's separation anxiety. It's bad enough for both of them to go into a serious depression if I separate them for too long. We almost found that out the hard way on the trip to our new home. It's quite cute now, but I'm going to have to find a way to deal with it if something happens to one of them. I'm not going to think about that until the time comes though. Right now I'm enjoying every minute of having them as my pets.
Top

I think one idea might be to make sure they were housed close to another couple of boars, hopefully laid back boars, to expand their "friendship" (or at least "acquaintance") circle.

Do you ever have multiple boars in a really large open area in your home? Or are they always out in pairs?
p.s. I hope this wouldn't backfire by having happy boars more aggressive in their cages.
Top

They are butted right up to Mr Bubbles. He and Gilligan do a lot of socializing. Of course when Skipper sees that going on, he has to get in on it too. All of the cages are in close enough proximity that none of the pigs feel alone. Combine that with all of the squeaking and cage wire noise, they're all very aware that there is plenty of company.

I never put the boars together with any other pigs that they aren't already paired to. Given their personalities, I honestly think it would be disastrous. I've already seen it with Sammy and Dean. Dean won't let any other boars near his Sammy. Mr Bubbles is and has always been a lone pig. He doesn't mind the other boys coming up to his cage, but he gets aggressive and lunges without the wire separating them.

I've never tried to have other boars with Wilber and Grady, but I see no reason to try it. They're the "middle guys" as far as age and size goes. Much smaller than Sammy, Dean, Gilligan, Skipper and Mr Bubbles. Much larger than Kahlua and Jack. Given the back and forth between them from time to time, there's a good chance that I'd have a vet bill if I mixed and matched them with any of the other boars. As far as Kahlua and Jack, they're still babies at just about 4 months old and wouldn't fare very well in a fight with any of the adults.

They're all pretty content with the way I keep them. The girls' cage is not butted against any of the boar cages. About all the boys know about them is that there are other guinea pigs in the room. At least that's what I believe, based on the way they act.
Top

There's not much I can say to do justice to the cuteness of a guinea pig like Gilligan chilling out in a hammock, so I'll just leave this right here for everyone to enjoy. 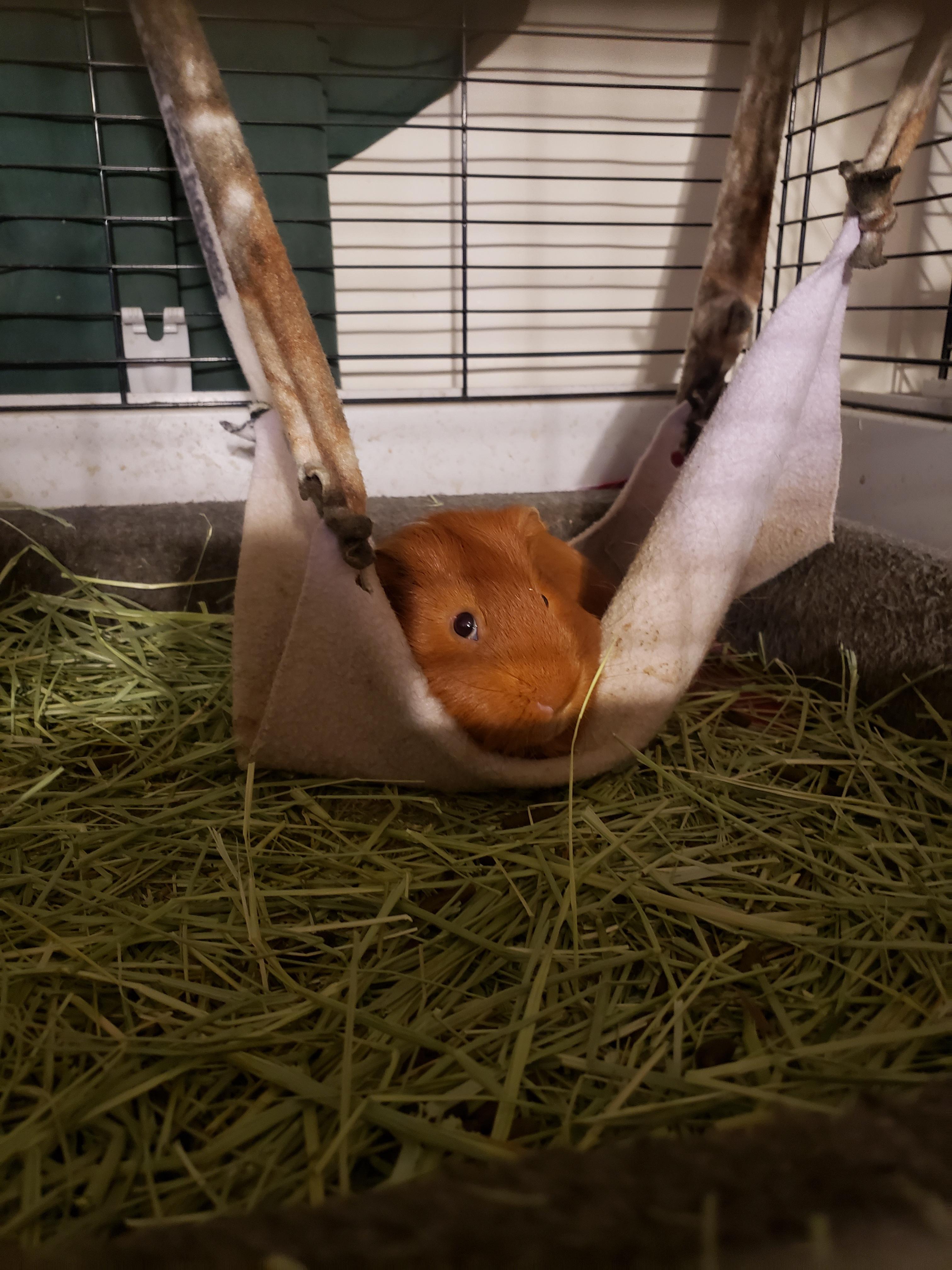