What the Hell? (or, Tump's Descent into Madness)

Peaceful protesters across from the White House got tear gassed and pelleted with rubber bullets this evening, so that our "fearless leader" Trump (who was previously hiding down in the bunker) could walk down the street to a nearby church for...a bizarre photo op:

I am. Speechless.
Top

I have never hated anyone in my whole life as much as I hate him.
Top

Maybe someone told him this was "end days"? End days (at least in office) can't come soon enough.

Contrast this yellow bellied coward with a real leader.

How to Make this Moment the Turning Point for Real Change
https://medium.com/@BarackObama/how-to-make-this-moment-the- ... 9fa209806067
Top

Trump has been itching to play army with his military men, and he finally got the chance. He loves a display of military power.

I believe that same mindset is what caused the situation with George Floyd - police officers who choose their career because they get a uniform, a weapon, and a chance to push people around.

I admire Pres. Obama so much. There are too few like him.
Top

When I see the coverage of the peaceful gathering of protesters across from the White House and the attacks on them - it is just tragic what trump has done.
Top

My gut tells me this is all just a precursor to what we can expect in November.
Top

Unsure if this will display, but hope so: 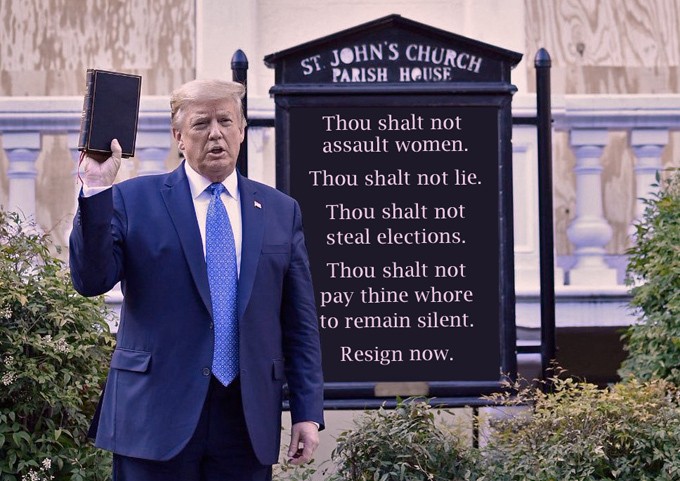 I generally don't follow any kind of politics because of my opinion of all politicians. However, even I can't ignore the horror of this whole thing. Gobsmacked.
Top

That's good Lynx. Ditto everyone. But especially "I have never hated anyone in my whole life as much as I hate him."
Top

Right on the mark.
Top

RavenShade
Thanks for the Memories

FYI, as of yesterday faith leaders could not get near the church to protest/pray so the area remains cordoned off.

If anyone local to DC hears church bells at 5:45 PM tomorrow, they are deliberate. Faith communities along 16th street are protesting between 5-6PM and are encouraged to ring their house of worship bells for 8 minutes and 46 seconds. His photo op did not go over well among many.
Top

Trump's little stunt may well be his undoing. We can only hope.

By the way, a few idiots in my town responded to the story about our peaceful protest at city hall the other day. At the protest, we didn't even chant. It was a silent protest; respectful. People have accused the group of being a bunch of instigators, "violent" [the local Walmart was spray-painted---NOT by anyone in our group], and "haters of democracy."
Top

"haters of democracy."
And of course, silent, respectful protest *is* democracy.
Top

I have disliked cops all my life and yes, I say all of them. Not, "it's only some bad apples". No they are all bad apples because I haven't met a one who will while at least being honest hasn't admitted to an "us against them mentality" with them being the rest of us or better put - civilians.

From the first seconds of an arrest however peaceful it could be cops immediacy become aggressive. The few times I've had handcuffs put on, my wrists were always bleeding afterwards because they put them on too tight, intentionally. I was once told "it's not supposed to feel good" I replied it's not supposed to cause injury either.

I don't know for sure about this happening everywhere but I am fairly certain it's happening in many places: Forget about rubber bullets, since these protests are happening everywhere now, many many forces wouldn't have access to "rubber bullets" which are really many different things what they will have or be able to get is what we call simunition amno. It hurts, it hurts a lot, I've been shot by it many times, and it’s intended to be used when soldiers are fully padded/protected. This has to be watched very carefully.
Top

Referencing this and trumps' time in the bunker --


Latest tweet from Trump:
Buffalo protester shoved by Police could be an ANTIFA provocateur. 75 year old Martin Gugino was pushed away after appearing to scan police communications in order to black out the equipment. @OANN I watched, he fell harder than was pushed. Was aiming scanner. Could be a set up?
Top

RavenShade
Thanks for the Memories

The man fell, hard, and was left bleeding on the pavement. Who fed him the line that it was a scammer, I wonder. Same people who think that there's a non-existent basement at a pizza place? It would be funny if it wasn't so frightening.
Top

Sef, I've wondered that since about the second day of his presidency. He doesn't write most of those tweets. They may be his idea, but somebody usually polishes up the spelling and adds the big words.
Top
Post Reply 174 posts