On the subject of Drones, ones not being used to carry out assassinations that is, I thought you might find this interesting

I am sure Soleimani needed to go but that probably wasn't the best way to go about it. A bit like using a Sledgehammer to remove a fly from somebody's forehead. I am sure Putin could give Trump some lessons in more discrete and subtle ways to remove opponents.

I guess we will just have to wait and see what the after effects are.
Top

"I am sure Putin could give Trump some lessons in more discrete and subtle ways to remove opponents. "

Ha! Like leaving a dead body in a hotel room.
Top

I was thinking more like Umbrellas that fire Polonium pellets or Novichok.
Top

Even better. The ultimate in discrete.
Top

What a great site rjespicer, I will make sure gpig doesn't miss it. The fight against poaching is near and dear to his heart.
Top

If you really want to give yourself nightmares over where drone technology could end up then watch this. If you get anxious easily then please do not watch it. It is fiction, for now, but shows where the technology could go if not controlled and regulated.

The world, or should I say the US has semminly stopped because Kobe Bryant died in a helicopter crash. Im sure he was a great guy, I didn't know him, I'm also sure the people who all had to leave wrok, not go into work so they could mourn didin't 'know him either.

It seems the reaction a bit over the top but hey I'm sure he wil be missed and he did seem like a good guy. Lots of good guys die every day.

As for helicopters; I was in two pretty bad helicoper crashes, one was the worst I've ever been injured and in both cases if not for incredible skill from the pilots we all would have died. As it were several people did die. Helicoppter flight is very very tricky and from what I've been told by good pilots, it's not something you do casually.

If a helicopter pilot doens't know how to autorotate at the alst second, forget it, and most don't unless they are in very hectic situations like combat, or flying with good chances of crashing and they know it going in. I only flew in heleicopters I did not take ground vehicles. I was in country for a long time and it was all about odds. IEDs can't get you if you're flying

Guys who fly non stop out to oil rigs in all types weather, guys taking the fire jumpers, etc, they're good becaue they are doing it all the time in rough conditions. They aren't flying rich people to 13 year old basketball games. Ive heard countless stories of wealthy people pressuring pilots to fly in bad conditions. Not sure if that was the case but it sure sounds like the guy had no business flying in what he was flying in. What a shame.
Top

I know i've promised my family i'll never do it again, I'll never leave here for other jobs but this is killing me. A woman I know from South Africa sent me this link and it is the most heartbreaking thing I have ever seen.

I'm sorry, but I have to do something. I'm out of my head right now. I don't know the details and they don't matter it's the fact this goes on becaue of people killing elephants also. I'm not a big, tough, bad ass man afraid to say I cry. I cry like a baby sometimes and I can't stop crying looking at this. Please be warned, it's elephants having a funeral for a dead calf.

That IS very sad, GPIG. Elephants are just such magnificent, intelligent animals. I so wish we could communicate with them.
Top

That is a very moving video.
Top

GPIG, what would you do for the elephants if you went there?
Top

What the heck is wrong with Mitch McConnell's hands? 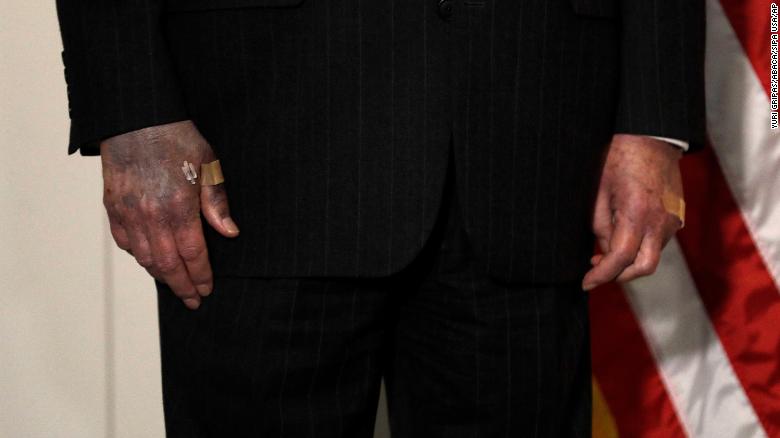 (This has been fact-checked and verified to be his hands by several sources, including Snopes--https://www.snopes.com/fact-check/mitch-mcconnells-hands/)
Top

Aside from being discolored, they look swollen & I see some bandaids.
Top

They look like my leg did after I fell on my knee and had a bad bleed as a result. I'm on a blood thinner, and that's exactly what a bleed looks like.

He's fallen in public recently, so maybe he fell again and hit both arms?
Top

Fox is saying it is likely just routine bruising if he's on a blood thinner. He has it on his lip, too:
https://www.foxnews.com/health/mitch-mcconnells-bruised-skin-condition-dermatologists 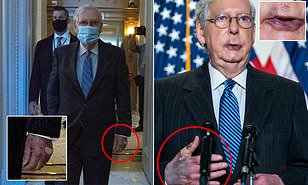 My husband is on blood thinners, too, and has a lot of hand discoloration but it doesn't look like that. Somebody on CNN (I think) threw out the possibility that it could be a reaction to Hydroxychloroquine, if his doctor put him on it as a preventive, but I haven't been able to find anything to substantiate that.
Top

It does look exactly like bleeding when you're on a blood thinner, but it is NOT normal. If it's the result of an injury, it's not so bad. But if he's bleeding that way without an injury, they've got him on too much medicine. If that's the case, I'd be petrified about internal bleeds.
Top

Maybe it's just the lighting. With my husband, he has red patches all over his hands from the blood thinner. It doesn't look like normal bruising, though. But to your point...this is not normal-looking unless trauma-related.
Top

Looks like too much blood thinner to me. My father-in-law had large spots on his hands that would look bruised, and any scratch or abrasion is dangerous because it's hard to stop the bleeding. This looks extreme, though, like it's a blood disorder of some kind. Looks like he might have to rely on science to figure it out, and Agent Orange isn't going to like that one bit!
Top

I was reading a twitter feed & lots of comments suggested blood thinner. An ER nurse (or claims to be) said he has all the hallmarks of a fall & "face plant".
Top
Post Reply 323 posts