It certainly does warm the cockles! I recall once, only once, one or two of the chickens half flying, calling out to me when I returned from a vacation!

I don't recall any of the current chickens being so happy to see me.
Top

We came really close to getting stranded by winter weather in Wyoming. Made it to Laramie before stopping for the night. It doesn't look like the roads will close tomorrow, so we should be able to get through. There's a stretch between Laramie and Rawlins that has wind advisory for 60+mph gusts, but my truck doesn't fall under the light high profile vehicle category. I just have to slow down and be careful. The roads are clear all the way home after that.

I will see my boys tomorrow!
Top

I hope you make it back without problems!
Top

Made it home safely. All 3 of the boys were very happy to see me. I held each one for a while. Mr Bubbles got mad and tossed his cage after I put him back. Another few minutes of lap time and a handful of hay made him happy again. Do you think he missed me?
Top

We always hope they do! They are all such great guinea pigs and have a real bond with you.
Top

No shortage of love and attention for Mr Bubbles since Barry Jenkins has joined the herd. He never fails to come to the door and demand his attention. There's no way on Earth that I can ignore him! He gets his finger nibbles, petting and a hug in each and every time. Sammy and Dean also; minus the hug since they aren't as much about that as Mr Bubbles is. Still, they're aware that the herd is increased by one. All 3 seem to be ok with it.

I am always worried about making sure each piggie gets the same love and attention. There's no such thing as a short visit to my boys.
Top

Found this old video of Scruffy nibbling on his cage for attention. Mr Bubbles and Sammy both still do this. Looks like he taught them well! I still miss my Scruffer.
Top 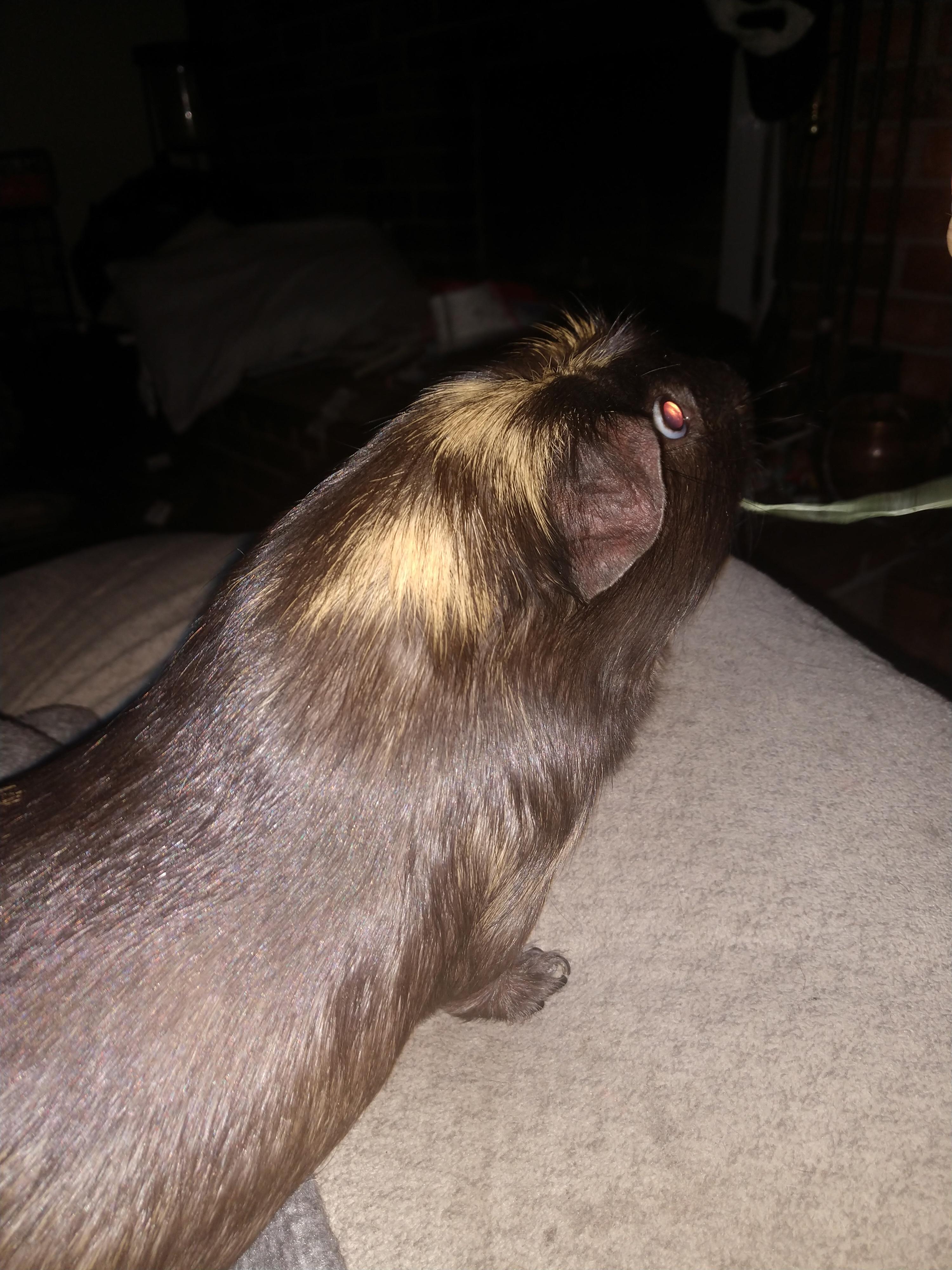 Look at Mr Bubbles stretch out! He grabs my finger and pulls it towards him if I don't have a treat for him or if I stop petting him during lap time. It's so funny!
Top

I love when they stretch out like that!
Top 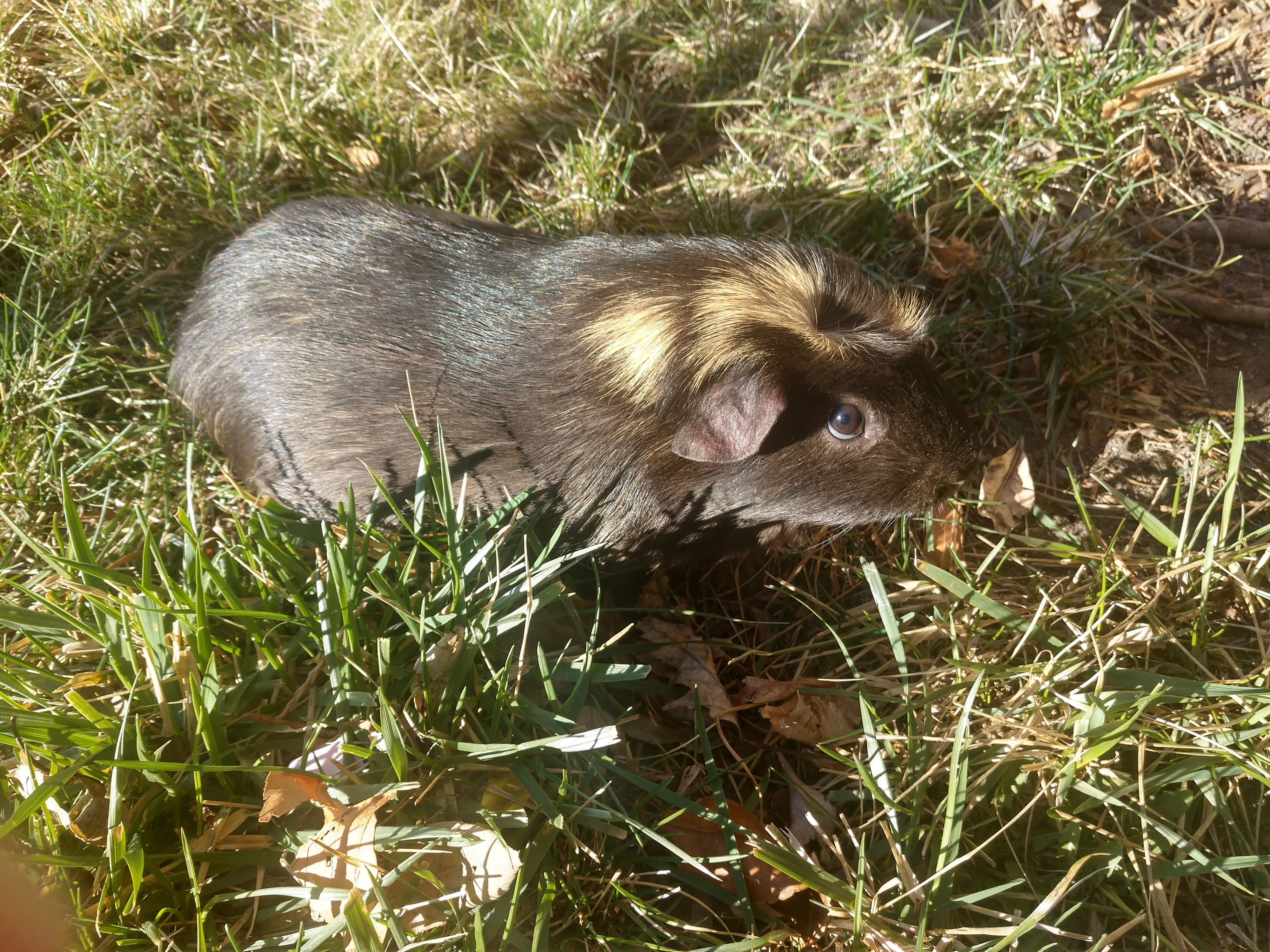 Mr Bubbles had his few minutes in the fresh air and warm sunshine today. There is a small patch of green grass. Snow is supposed to be here on Sunday, so I was glad to have this chance to let him graze. Even though it was only a short time.
Top

Handsome boy! Glad he got some fresh air.
Top

How nice! We have months to go until green grass. Of course, Lacey doesn’t understand that so when I come in from taking the dog outside she’s staring me down wondering where her fresh grass is. And I’m on the last bag of frozen corn husks, so in the next month or so things will get ugly around here.
Top

We don't normally get any green grass this time of year. We're in a little bit of a false spring right now but that's supposed to change in the next day or so.
Top

I got tied up with some things today and this evening. The kids are having a get together with friends for Valentine's. With all of the prep work and waiting for my wife to change the bandage on my finger, I didn't get to the store for the guinea pig veggies until very late. I was a couple of hours late giving the boys their night time veggies. There's always plenty of hay in their cages for them to eat at their pleasure, but the veggie service is something they are all accustomed to at a particular time.

When I'm late by more than half an hour, they start letting me know. Poor Mr Bubbles must have been really angry because he tossed his cage like I've never seen him do before. He had dumped over his pellet bowl, turned over his house and pushed it across his cage and was laying down in his tunnel. He goes in and out of it, but he only lays in it when he's mad. When I went to get the tray I serve them from, he was looking out at me with a scowl.

After that quick little dirty look and I set his house and pellet bowl back, he went to doing zoomies (something he rarely does), popcorning and squeaking vehemently. It was both sad and adorable. The others were happy to see me come in to get the tray too, but they hadn't tossed their cages. I felt so bad about being late with the veggies that I took him with me to the kitchen and had my granddaughter hold him while I prepped the veggies. I also gave him a couple of little scraps to munch. He's all happy again. I never realized how the boys are set into the feeding routine and that they know when it's time to get veggies. Now I know.
Top

Each of these guinea pigs is such a personality! Sounds like you need to set a carrot stick or something aside to hold Mr. Bubbles over should you be late again!
Top

"He grabs my finger and pulls it towards him" It's so cute how they tell you what they want. Our girls seem to be aware that it's veggie time +/- about 1/2 hour.
Top

How do they know the time? Around 5 pm Lacey gets really demanding for veggies and she has corn husks in mind. If I try other treats first, she throws them on the floor of her cage. This is the time I would get home from work. She and the dog and I would all have a treat. I retired, but she still has me on the clock.

And of course anytime I put a treat in the dog’s dish she comes running, even if she was fast asleep. If she doesn’t get a treat, she paces and wheeks and practically climbs the cage.
Top

Things start getting slammed around in Mr Bubbles cage if I'm more than half an hour late with the veggies. A guinea pig with a temper and an attitude. How adorable is that? When he's happy, I get guinea pig kisses. When he's not, I get the evil eye and a tossed cage.
Top

Don't show this picture to your lady piggies. They'll want to meet this handsome guy! LOL! 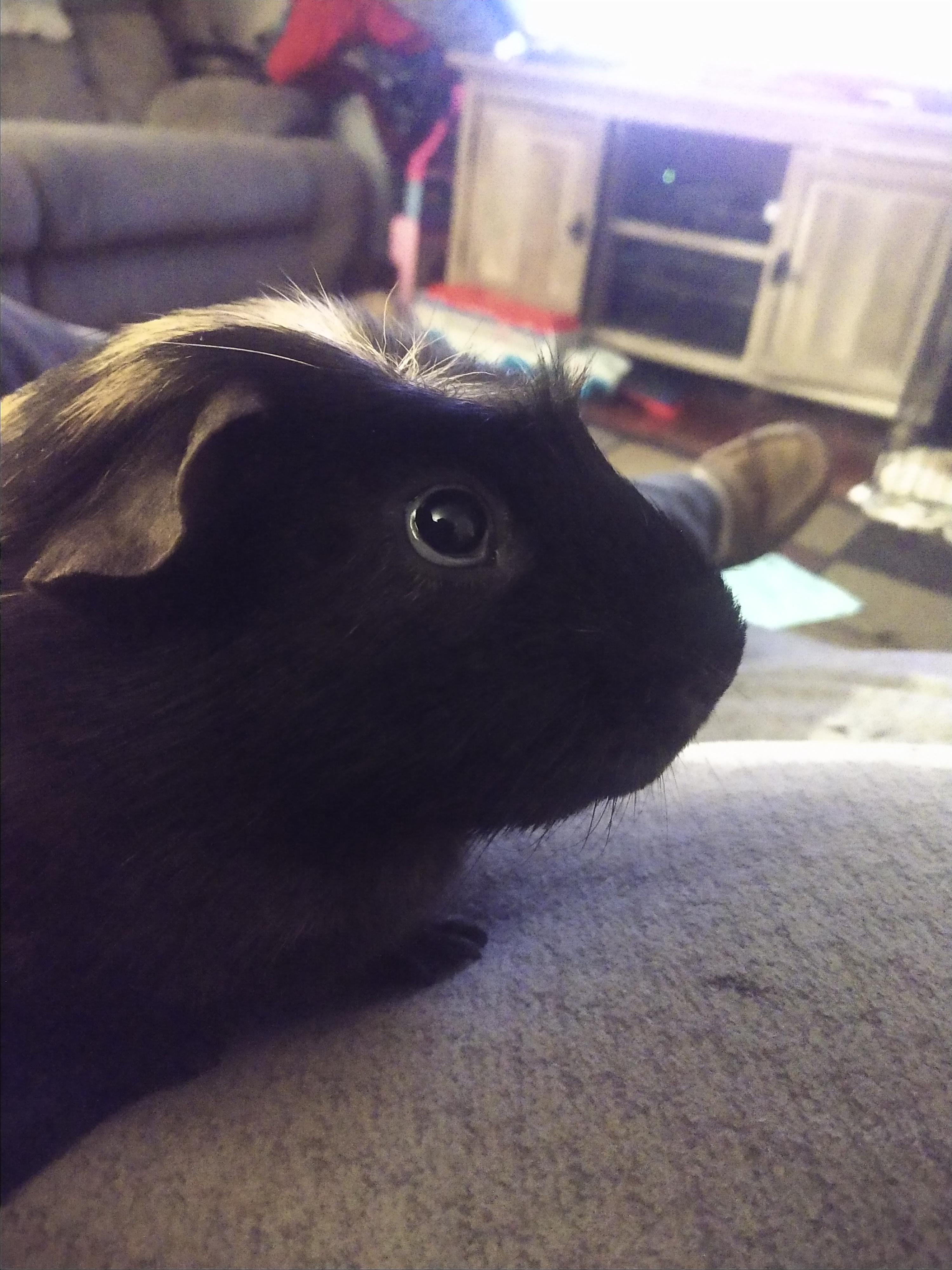