While there are many possible reasons for hair loss, the most common reason by far is microscopic mange mites, a painful parasitic condition easily treated with ivermectin. Fungal infections are a close runner-up.

Old age does not cause hair loss. Any hair loss in an older guinea pig should be investigated.

Check over this list for the possible causes of hair loss:

Often starts on the face, usually easily treated with an anti-fungal cream.

Bald Spots Behind The Ears 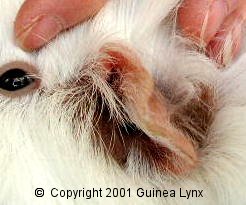 The new guinea pig owner, after reading about hair loss and mites, lice and fungus diseases, will hurriedly run over to check their own pig, and be alarmed to find that it has what appear to be a couple large, fur-less areas behind the ears. Hours after I got home to thoroughly examine my new guinea pigs, I noticed the very large bare area in the back of (and wrapping slightly around the front) of my soft white pig's ears and dashed off a note to the breeder asking if I "needed to continue treatment" for whatever was the problem. She assured me they were supposed to be that way; it is genetic and they provide a good place to kiss a guinea pig. I have since taken her advice. It appears that as long as the skin seems healthy, this is just the way they are.

A description of these bald areas:

Long haired guinea pigs tend to shed more than short haired ones. While this may be normal and some guinea pigs seem to shed excessively, it is important to note that shedding may be one of the early signs of a parasite or fungal infection. Watch for general thinning of the coat, excessive scratching, sores, dandruff (more visible in darker colored guinea pigs) or other indications your pig may need treatment.

Daily brushing with a metal greyhound comb will help remove some of the loose hair and lessen shedding. 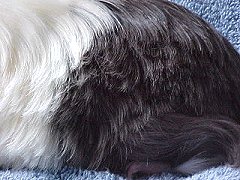 Although they may have all the hay they want, no lack of nutrients, and ample space to move about, some guinea pigs are bound and determined to chew on the hair of their cage mates. Apart from isolating the industrious guinea pig, there is little that can be done to effectively curb this behavior. Application of "bitter apple" is claimed by some to work, but others just accept having a "designer pig" or provide private living quarters for the offender. If you are not showing your guinea pigs, this should not be a very serious concern. 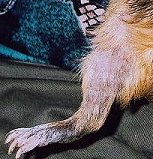 Self Barbering: Other pigs (like the two pictured here) barber themselves. Evangeline's black and white guinea pig would have hair 3 to 4 inches long if it weren't for her tendency to trim her hair shorter. Barbering can also be triggered by pain or discomfort (gas, bloat, or other discomfort). Tumors have occasionally been found internally in the barbered location.

Pinta's guinea pig, Abigail, continually barbers her legs. It seems to be a neurotic habit. Photos of self-barbering sows contributed by Evangeline and Pinta. 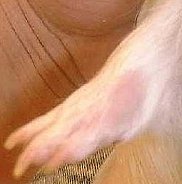 A few guinea pigs are fighters, not lovers, and skirmishes may result in hunks of hair being yanked out of some unfortunate guinea pig's pelt by a more aggressive one. Some owners will try to let them work things out on their own, only separating them if one is severely being victimized. A very young child may pull out a guinea pig's hair. In another case, a combination of unprepared vet and uncooperative guinea pig resulted in a painful patch of fur loss. And V.C.G. Richardson reported a case where a guinea pig kept outside was losing hair to a robin to provide nesting material! (Diseases of Domestic Guinea Pigs)

The environment they live in may provide clues to other hair losses, such as hair being rubbed off the back by running in and out of living quarters or a plastic tunnel.

Guinea pigs usually have bald spots inside the front legs (see photo at right), perhaps as a result of grooming, with the hair being continuously rubbed off by cleaning their faces and eventually failing to regrow.

Baby guinea pigs will occasionally loose the hair from their noses when nursing. Photo contributed by Cheryl Hustwith.

Pregnancy and Lactation: When associated with pregnancy and lactation or an ovarian cyst, these will generally be bilaterally symmetric. Intensively bred sows especially in the last trimester may experience thinning and loss of hair. Repeated breeding will result in increasing loss of hair during pregnancy and lactation. It is "thought to be due to reduced anabolism of maternal skin associated with the rapid increase in fetal growth. Nutritional and genetic factors are also involved and affect degree of alopecia." (VetPath)

Cushings Disease: Pinta has a pig that she initially thought had mites, and then cysts due to the hair loss. An ultrasound revealed enlarged adrenal glands. It turned out to be Cushings disease. "Tiramissou is now on daily doses of L-deprenyl." The most recent information indicates that Tiramissou has total hair regrowth. "We think it's due to the laser treatments although there is an outside possibility that the L-deprenyl finally reduced the adrenals enough to normalize her hair growth." See Tiramissou's case history.

An ultrasound can aid in diagnosis. If your vet uses an ultrasound, take a comparison pig of the same sex, size and age if possible. Guinea pigs have small adrenal glands (3 to 4mm) and most technicians will have no idea what's normal without a pig for comparison.

Ovarian Cysts: Hormonal changes in sows that develop ovarian cysts can cause hair loss, usually appearing first on the sides.